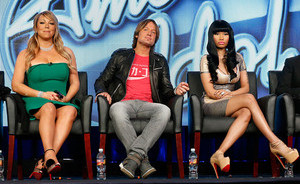 Nicki Minaj has said she ended her drawn-out televised spat with fellow American Idol judge Mariah Carey by watching Minaj's sex tape together
Last October, Minaj threatened to "knock out" Carey during a taping of the American Idol auditions. The warring duo came to blows when a disagreement over a contestant's performance prompted Minaj to launch a tirade of insults towards Carey
Asked whether the pair had put their warring behind them at a press conference about the new series of the programme, Minaj said they had called a truce, The Sun reports. Asked how they made up, Minaj replied: "I put on my sex tape" before Carey said: "Time heals all wounds". Minaj then added: "And we watched my tape ... We’re professionals."
Earlier this week, Mariah Carey claimed she had to hire extra security staff while working alongside Nicki Minaj on the programme because her fight with rapper made her feel "unsafe". She said that the heated argument between the pair, which was caught on camera, resulted in an "unsafe work environment".
"Anytime anybody’s reeling threats at somebody, you know, that's just not appropriate. Sitting there on the road with two babies, I'm not gonna take any chances, so yeah I did hire more security," she said
Source: NME
what
Tags: mariah carey, nicki minaj
Subscribe
Previous
← Ctrl ← Alt
Next
Ctrl → Alt →
Previous
← Ctrl ← Alt
Next
Ctrl → Alt →