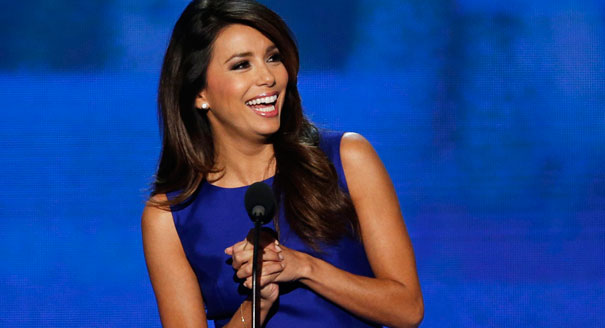 The "Desperate Housewives" star will host the evening at the Kennedy Center in Washington, D.C. on Sunday, January 20, the day before President Obama officially begins his second term as president. More than a dozen entertainers and groups, from José Feliciano and Llewellyn Sanchez-Werner to Ballet Hispanico and the Pan American Symphony Orchestra, will perform.

"Latinos played a critical role in this year's elections and helped tip the scales in President Obama's victory. But we are not waiting another four years to make an impact on our country's future, and Latino Inaugural 2013 will set a path for Latino civic engagement in the near term," Longoria said in a statement. "What better way to establish our presence at these inaugural celebrations than by showcasing the beauty and diversity of our culture at the nation's premier performing arts center."

The event will be the culmination of a three-day series of lectures and culture gatherings aimed at bringing together Latinos from diverse backgrounds to "develop an agenda that betters the community and strengthens the country as a whole," according to a news release.

The Kennedy Center, which awards the prestigious Kennedy Center Honor, has recieved ctis recently for the lack of diversity of the honorees. Only one U.S.-born Latino, Chita Rivera, has ever received the award out of a pool of 180 winners. The Center has set up an advisory panel to look into the way winners are chosen.

While some, such as National Hispanic Foundation for the Arts chairman Felix Sanchez, argue that the Kennedy Center has overlooked Latinos, the Kennedy Center has previously hosted the Hispanic Heritage Awards. That award was developed by the White House in the late 1980s to commemorate the creation of Hispanic Heritage Month. The awards honor Latino leaders from a variety of fields, from entertainment to medicine.

Organizers of this inauguration event tout it as a way to showcase the contributions of Latinos on a national stage.

"As we inaugurate President Barack Obama, it is important to recall what President John F. Kennedy knew: that beyond the battles of politics 'we will be remembered for our contributions to the human spirit.' Latinos are now deservedly taking their place at center stage of U.S. culture," Latino activist and designer Henry R. Muñoz III, who will serve as an executive producer of the event, said in a statement. "We invite every American to join us on the evening of January 20, either in person or by live stream

She seems like such a great person and she was on point during the election. Lets Discuss my fellow ONTD Latinos and anyone else who wants to join!