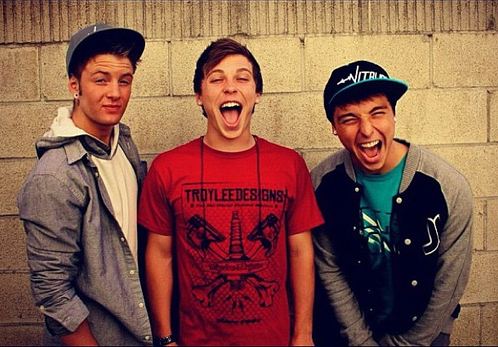 Simon Cowell is hoping to make stars of another all-boy group: California's own Emblem3.

The X Factor creator and judge, who mentored the Huntington Beach-based trio on season two of the series, has made it official, signing Wesley Stromberg, Keaton Stromberg and Drew Chadwick to his Syco Music via Columbia Records, The Hollywood Reporter has confirmed.

The boys are already in the studio working on their debut album, due out later this year, executive produced by Savan Kotecha (Maroon 5, Usher, One Direction).

"I was so impressed by the talent and energy of the Emblem3 boys that I had to work with them," says Kotecha, who also serves as vocal coach to many X Factor acts. "I'm looking forward to helping them fulfill their creative vision and working with the amazing Syco and Columbia team who, in my opinion, are the best in the business."

The as-yet untitled offering will be the first release through Kotecha's "Kanani" imprint on Syco Music.

"With our new teammates at Columbia and Syco and along with Savan, I hope we can not only produce some empowering tunes, but also impact other people in a positive way and maybe help brighten things up a bit," says Wesley. "Music is all we've ever wanted to do -- and this is what we love to do."

The anti-boy band quickly became a fan favorite on season two of the Fox reality competition, performing an original song titled "Sunset Blvd." at their San Francisco audition, the official YouTube video of which has garnered more than 3 million hits. Emblem3, who count Sublime among their favorite artists, breezed through to the live competition where they were mentored by Cowell. They were ultimately eliminated in the semifinals after performing well-received renditions of "Baby I Love Your Way" and "Hey Jude."

"We're happy because we can go make some badass music now and not be under any restrictions," Wesley told reporters following their elimination. Added Drew, "The bottom line is we had the dopest experience. We got everything we really wanted out of this competition, which was a solid international fan base. We expanded our comfort zone by stepping out of it."

Cowell made no secret of his affections for the trio during the competition, telling reporters earlier in the season that he hoped to sign them regardless of the show's final outcome.

"Wesley, Drew and Keaton are complete stars," Cowell says of the signing. "They have a great attitude, are fun and genuinely love music. They deserve this and I'm really pleased we are continuing working together."

Brothers Wesley, 19, Keaton, 16, and lifelong friend Drew, 20, grew up together in Sequim, Wash., where they discovered a love of music at an early age. The three later moved to California to be closer to the industry, as well as indulge their passions for surfing, skating and snowboarding.

As THR previously reported, the Stromberg family boasts impressive Hollywood ties. Their uncle, Robert Stromberg, is currently directing Angelina Jolie in Disney's live-action Maleficent film and their father, William Stromberg, is a Grammy-nominated composer who has worked on A-list television shows such as Lost.

Drew made mention of a Columbia deal earlier this week, explaining that the label had moved all three boys into "a nice apartment in Burbank" while they record, and that a mini-tour in South America and Brazil is already in the works, but has yet to be finalized.

Emblem3 also made headlines this week when the band tweeted: "We just made our first ten grand on iTunes! Thank you so much to everyone who bought our songs when they werr [sic] up! I can't wait to hangout!"

Prior to X Factor, Emblem3 performed at landmark Hollywood venues including the Roxy, Whisky A Go Go, the House of Blues and the Hard Rock Cafe, and took the top prize at Rock N' Road's Orange County battle of the bands in 2011.


So excited for my boys!! Haters will DEAL as they become a sensation <3