Liam & Louis return from Sweden – Niall did NOT get a tattoo! 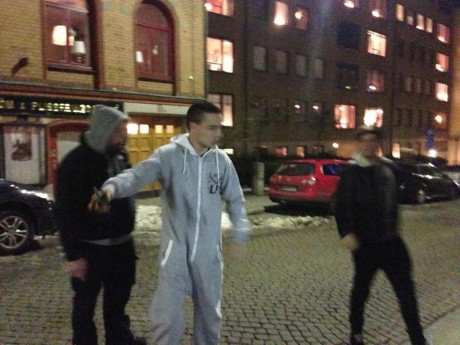 Liam Payne and Louis Tomlinson have returned from their quick European trip.  The One Direction boys took a quick flight to Sweden this week and were pictured meeting and greeting fans, in various states of dress.  At one point Daddy Directioner was rocking a onesie in public and he seemed to enjoy the strange looks he got from some passers by. The fangirls didn’t mind either and Twitter exploded with young Swedish 1D enthusiasts who were elated to meet their idols.
The lads will start back to work this week and last night Liam and Louis were spotted in the airport, returning the UK. Niall Horan revealed that they are kicking off rehearsals for the upcoming One Direction world tour very soon and tweeted:  “Rehearsals for TMH tour start soon, cannot wait”
He also wanted to quash some rumours, after it was reported that he got a tattoo on his collarbone. Some fans had tweeted that the Irish singer had finally succumbed to pressure from his bandmate and had his first piece of body art. He insisted it isn’t true though and wrote:  “Gettin a lot tweets about tattoos! I didn’t get a tattoo! Not plannin on gettin one for a while either haha”
We don’t know when he’d have time to get a tattoo anyway, as Nialler has spent most of this week hanging with the lads and going to football matches. He even tried his hand at monopoly a few days ago but it doesn’t sound like it went too well and Ed Sheeran tweeted:  “monopoly with @zakarywalters @NicMinns @joshharte1 & @NiallOfficial and the irish lads, we all lost intrest and now are back to drinking”
Source
Tags: one direction
Subscribe
Previous
← Ctrl ← Alt
Next
Ctrl → Alt →
Previous
← Ctrl ← Alt
Next
Ctrl → Alt →