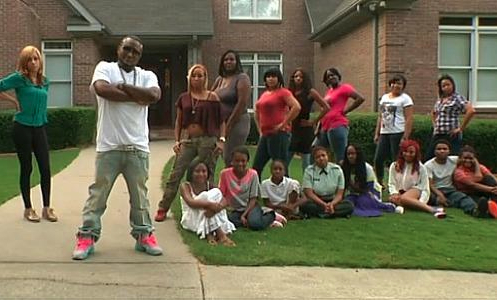 Have we gone too far? It's a question we ask at the outset of every outrageous new reality series—be it "Survivor" or "Here Comes Honey Boo Boo." It's also usually an early sign of a show's success.

"All My Babies' Mamas," a one-hour reality special slated to air in the spring of 2013, features Carlos "Shawty Lo" Walker, an Atlanta-based hip-hop artist with 11 children by 10 different women. Oh, he's also got a 19-year-old girlfriend, who's a year shy of his oldest child. But response to a new show teased as part of Oxygen Media's spring lineup, seems to mark a momentous moment when reality has truly jumped the shark. Collective and largely unchallenged outrage over the network's upcoming show "All My Babies' Mamas" is the unusual case of a show sparking enough controversy to potentially kill it.

By the looks of the leaked sneak peak and an early press release, the show's take on this challenging family dynamic is more "Brady Bunch" than "An American Family."

"As the household grows, sometimes so does the dysfunction, leaving the man of the house to split his affection multiple ways while trying to create order," reads the goofy-sitcom-style description, in a press release posted the Oxygen's website late December. "Will there be a conflict over a family holiday, who needs school supplies and who holds the household finance purse strings, or can these feisty babies' mamas band together and live peacefully as one family unit?"

Since the show was publicized, the conflict has been primarily off-camera. Calls for a boycott of the network and a petition to pull the special from the network's lineup have risen to a fever pitch in the past week.

"By pushing these degrading images, your company seeks to profit from the humiliation of girls and women and the blatant stereotyping of African-Americans," writes, Sabrina Lamb, the woman behind the petition.

Lamb first noticed the press release on Oxygen's website, and after watching a 13-minute sample reel of the series on YouTube—which at one point features Shawty Lo unsuccessfully naming his 11 kids as quiz show music plays—she wrote an open letter to the present of Oxygen calling for the cancellation of the show before it goes to air.

"The focus of our outrage is that they would dare exploit the pain of these children and that Oxygen would promote this toxic situation to its young, impressionable female audience," Lamb, an author and cultural commentator, tells Yahoo! Shine. "There's no way this can go forward. We're going all the way to the end with this."

As of Friday, her plea to the network's president had received well over 13,000 signatures and countless support from bloggers, journalists, and activists, including the NAACP.

But network executives may be just as hellbent on attracting those young, impressionable women Lamb is talking about. In the show's press release, Cori Abraham, senior vice president of development for Oxygen Media promises, "All My Babies' Mamas" will be filled with outrageous and authentic over-the-top moments that our young, diverse female audience can tweet and gossip about."

Cat-fights, questionable parenting, and unregulated households have become the bread-and-butter of cable TV ratings. The soaring success of "Honey Boo Boo," "The Real Housewives" franchise, and the Kardashian conglomerate all hinge on those three voyeuristic elements for success. But it seems Oxygen has officially gone too far for viewers—if those 13,000 signatures are any indication.

"As a respected African-American media professional I can not in good conscience allow this program to move forward," writes radio personality Morris O'Kelly in an open letter to Oxygen.

Lamb and her fellow critics take particular offense to the press release's suggestion of scuffles between women for entertainment purposes, and the fact that each woman is given a pithy nickname to describe their flattened, TV-friendly personalities ("Jealous Baby Mama" and "Shady Baby Mama" are two of the moms). Shawty Lo's teenage girlfriend as the can-it-get-more-outrageous X factor doesn't help.

"You've got a network with international reach telling a young female audience it's okay to have unprotected sex, that other women are enemies, that they're not valued by men, that their financial sustenance should come from a man, and that babies are just spectators in all of this," Lamb tells Shine. Still she wants to be clear: "This is not just a women's issue."

The depiction of a disjointed African-American family, with an ill-suited father, is also a sticking point.

"To someone committed to the black family, who has spent a good part of his career fighting to improve the image and perception of black men, this all feels like a sticky gob of spit in my face," writes My Brown Baby's Nick Chiles in a post titled "If We Let Shawty Lo's Show Get On Air We Will Have All Failed Ourselves."

Chiles also notes the irony of the network's history. "Painfully, Oxygen is the network that was started by, among others, Oprah Winfrey in 1998, with the brilliant idea of—wait for it—empowering women," he writes. "But 1998 was a loooong time ago. Since then, it was purchased by NBC Universal in 2007 for $925 million and any kind of mission about female empowerment was long ago abandoned."

Oxygen is not the first network to face backlash for exploiting the tribulations of troubled family dynamics. In fact "Mamas" co-creators and former MTV honchos, Tony DiSanto and Liz Gately, faced similar outrage with the launch of their hit series "Teen Mom" a few years back. But this may be the first time a show has been boycotted before it has even completed production.

"What we have here is a show that's not even on air," says Lamb, who also runs World of Money, a nonprofit dedicated to the financial education of children. "We can fight this. We can say to advertisers if this show, about kids watching their mothers fight each other for crumbs, is what you value, then we don't support your brand."

Shine's request for a statement from Oxygen was not returned by press time. However, we did obtain correspondence between Oxygen President Jason Klarman and the New York Chapter of the NAACP, after a representative from the organization requested the show be dropped from the network.

In his emailed response, Klarman claimed "the show is still in early development" and the footage leaked was "not representative of the final special, which is still being cast and developed." He also responded to the accusations of racial stereotyping. "While we are seeking to chronicle a true story, it is not meant to be a stereotypical representation of everyday life for any one demographic or cross section of society…That said, we are highly attuned and sensitive to your concerns and our diverse team of creative executives will continue their involvement as the special is developed."

Klarman's email is unlikely to quiet the growing campaign against the show and the network. Lamb, for her part, is making it her personal mission to thwart Shawty Lo's debut. "I don't want him on TV," she says. "He needs therapy and condoms, he doesn't need a TV show."

All My Babies Mamas sneak peak