The couple first met backstage at the Kids' Choice Awards on March 31. Swift was seen singing and dancing during One Direction's performance. Shortly after the award show, Styles began following the American singer on Twitter. Also that week, Justin Bieber invited both Swift and One Direction to his LA mansion, where they swam and "just hung out". Bieber later told Britain's Daily Mirror that "one of the biggest artists in the world thinks Harry is so hot, but I have been sworn to secrecy." Weeks later, during an MTV interview, the other four members of One Direction teased a bashful Styles about Swift. "Did any particular person stand out for you [at the Kids' Choice Awards]? Just so we can get your drift ... a really quick one." When Styles finally mentioned Swift's name, his bandmates shouted, "Jackpot!" As the conversation moved on, Styles muttered to Louis Tomlinson: "I'm going to kill you!"

In late April, One Direction began a tour of Australia and New Zealand, during which Styles revealed that he had exchanged numbers with Swift: "We met in America. She is very talented. She's very nice ... We're friends." However, the flirtation with Swift appeared to come to an abrupt end when Styles was photographed kissing model Emma Ostilly during a night out in Auckland, New Zealand. Radar reported that, although they weren't exclusive, Styles had "hinted at making it official" with Swift just before he left the US. "He even told Taylor he didn't want her to see anybody else while he was gone. Taylor woke up one morning to confusing text messages from him, begging for a chance to explain and telling her not to believe everything she reads. She immediately googled Harry and found all the stories and pictures of him kissing Emma." In the following months, Styles was linked to model Cara Delevingne while Swift enjoyed a two-month summer romance with Conor Kennedy. In a July interview, Swift was asked to name her favorite One Direction member and jokingly replied, "How could you possibly choose?!"

Styles and Swift posed with fans at LA's Katsuya in September

The pair were next seen together on September 6, when Popstar magazine reported that Styles and his bandmates watched Swift's final MTV Video Music Awards rehearsal. The couple later enjoyed a post-show meal at LA's Katsuya with a group that included their mutual friend Ed Sheeran and Swift's bandmates. They posed separately for photos with fans inside the sushi restaurant. Swift and her boyfriend Kennedy, a prep school boarder, had their final meeting on September 16. In October, a source revealed that the couple had "quietly parted ways a while ago. It was just a distance thing. No hard feelings. They're fine."


In October, The Sun reported that Swift and a "mystery" member of One Direction had arranged to have an intimate dinner at the upmarket Luton Hoo Hotel after their respective performances at London's Radio 1 Teen Awards on Sunday October 7. However, when the tabloid's Bizarre columnist received a tip about the reservation, the meal was suddenly cancelled. When One Direction were asked about the rumor during an Irish chat show appearance, Louis Tomlinson suggested that Harry "take this one". However, Styles replied that he "didn't get asked" to dinner. Later that month, Styles named Swift as one of his celebrity crushes, alongside Rihanna and Rita Ora, telling Seventeen: "She honestly couldn't be a sweeter person. She's genuinely nice and extremely talented, and she deserves everything she has."

At the beginning of November, Styles told Cosmopolitan that he was currently dating someone: "There's someone I like. If you're shown in the papers with other girls when you really like someone else, that's difficult. But still, I think it's important if you're thinking about starting a relationship to do it away from the spotlight. I thought I [had a type] but this girl I like isn't my 'type'. It's more about the person. How they act, their body language, if they can laugh at themselves. I find ambition really attractive too - if someone's good at something they love doing. I want someone who is driven." 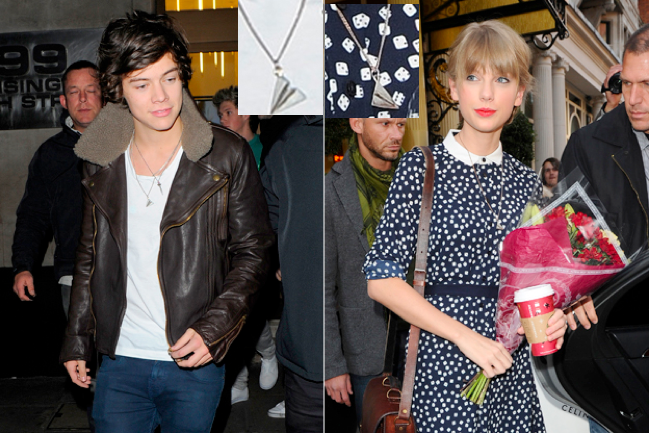 Styles was photographed wearing his necklace on October 30. By November 7, it was in Swift's possession

During promotional appearances in London and Paris on November 7 and 8, Swift was photographed wearing a silver It's A Paper Airplane chain identical to that owned by Styles. Interestingly, Styles has not worn the necklace in November, replacing it with a new pendant. Another telling sign of the budding relationship may have been a look Styles shared with his bandmate Niall Horan after Horan told People his favorite song of 2012 was Swift's "We Are Never Ever Getting Back Together." When asked if he would ever date Swift, Horan gave a small laugh, looked at Styles and answered with a succinct, "no."
The new couple went public with their romance last week. Styles flew from New York to LA on November 14 to spend two days with Swift, before catching a red-eye flight to London where he was scheduled to make a BBC television appearance with One Direction. (The other four members of the group flew directly from New York to London, giving them a day to rest before their television appearance.) Gary Lightbody revealed on Twitter that he wrote a song with Styles in LA on November 14. (Lightbody and producer Jacknife Lee recently collaborated with Swift for a song on her album Red but there's no word on whether she made the introduction or was present during the writing session.) Styles accompanied Swift to an LA television studio to rehearse for her X Factor performance on November 15. "He was sitting with her mum Andrea and she seemed won over too", a source told The Sun. "After Taylor finished, he picked her up over his shoulder and carried her to her trailer. They were holding hands and flirting all day." The source continued, "Taylor was really embarassed by what happened [in April] and was nervous about giving him another go. But this time they have spent more time getting to know each other. Harry is being careful because he doesn't want to hurt her again. But he's made it clear he likes her a lot. They've been quietly seeing each other again for a little while now."
Sources: Bieber interview 1, Bieber interview 2, 1D MTV interview, Harry's interview with Australisa's Herald Sun, Radar report, Taylor's Teen Choice Awards interview, Katsuya picture 1 2, The Sun's mystery dinner report, The Late Late chat show, Seventeen interview, Cosmo interview, necklace photo, The Sun report