Tom Hiddleston on Thor 2, style essentials and the theoretical soundtrack to his life 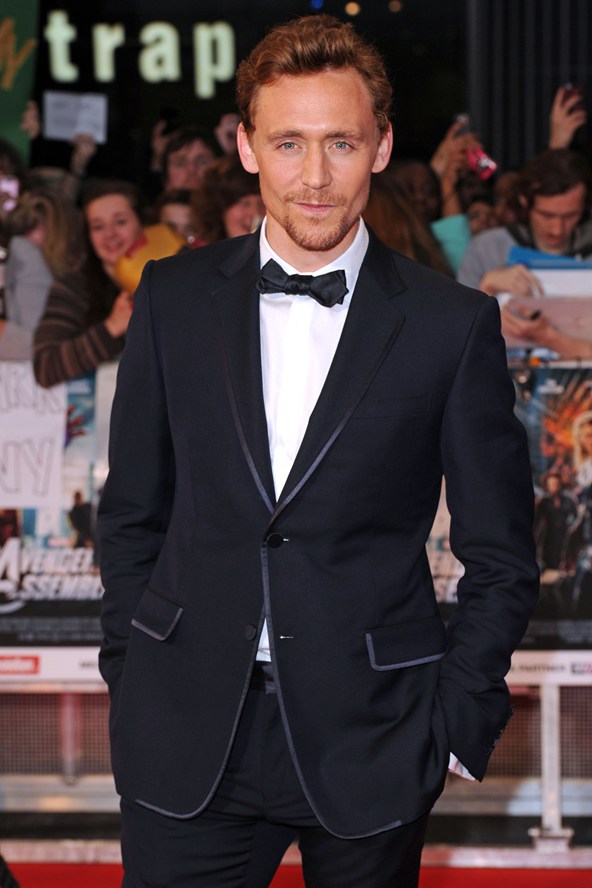 "I thought a dash of colour on a grey Friday morning," says Tom Hiddleston cheerfully. Clean shaven and wearing a handsome royal blue Louis Vuitton jacket, the Avengers star is looking good even by his enviably high standards - only appropriate, given his recent appointment to the BFC Menswear Committee for London Collections: Men.

After a hectic year starring in War Horse and the record-breaking smash that was Avengers Assemble, Hiddleston is already back in the guise of Loki filming Thor 2 ("Or should I say Thor - colon - The Dark World") but first, he's in London to promote the annual Jameson-Empire short film competition Gone In Sixty Seconds. GQ sat down with Hiddleston over coffee at London's The Arch hotel to talk Thor's post-Avengers future, British menswear and Icelandic vodka.

GQ.com: You're filming Thor: The Dark World at the moment - are you feeling more pressure after the success of Avengers?
Tom Hiddleston: It's mostly self-applied pressure actually. I remember Chris [Hemsworth] and I saying over the summer when Avengers came out, where do we go now? Going into this one we were - very flatteringly - involved in big creative conversations about tone, and story. Thor and Loki are these two characters that people know and love and understand - so we have to take this in the right direction. You want to do something new - you don't want to re-heat the same recipe in the microwave, you want to cook up something different and exciting - but you don't want to lose the things that worked the first time. So we're our own slave drivers, in a way. Complacency is the enemy. But that's exciting and it's going well. I have never seen a group of actors or a crew work harder.

How has Avengers influenced the rest of the Marvel franchises? Loki being Hulk smashed - you can't ignore that has happened.
Yeah! [laughs]  He's certainly eaten humble pie. The springboard for us in the second Thor film is at the end ofAvengers you see Thor and Loki beamed up back to Asgard. The first question that we all asked was "what happens next? What does Odin have to say about the events of Avengers?" What's Jane Foster been up to while she wasn't involved?" It's really exciting, actually. We're literally half way through - we started at the start of August and we should be finished by Christmas. It's going beautifully.

You're quite into your music - your "song of the day" on Twitter, for example. One of your fans had a good question: if you had to choose an artist to record the soundtrack of your life, who would it be?
Oh my god, that's an incredible question. Let me just think about this. I'm such a soundtrack freak myself - I need to consult my computer! I wonder if it would be electronic or it would be classical? I think a mixture...

Speaking of Thor, you've been tweeting about Idris Elba's Mumford & Sons video.
Yes! Well I think that's a great album, but I'm not sure they would be the soundtrack of my life. I would love to have Bon Iver write some stuff because their music is so soulful. Sigur Rós! Yes! So, we actually shot some of Thor 2 in Iceland and it was amazing when we were actually there, driving up these volcanoes listening to Sigur Ros. It suddenly all made sense. I think I must have Icelandic ancestry - I haven't researched it, this is completely unofficial, I just feel very at home there. Or, the further north I go the more at home I feel. I went to Hawaii in the spring and I thought "this is paradise, why don't we all live here" but I confessed to myself that I don't belong in a tropical environment. I belong where there are mountains and snow and clear, crisp blue skies.

How do you make your favourite drink?
When I'm at home, and I'm not just saying this, I'm very partial to a Jameson on ice. When the nights draw in it's nice to come home, tinkle a few ice cubes in a tumbler, pour a little Jameson in and watch a movie. But if I'm going out, I'll probably have a vodka tonic - either Kettel or Grey Goose. Actually in Iceland there was a great vodka called Reyka. We would shoot on this dormant volcano, then we'd come back when the sun went down. It was really cold - sub zero already - and I'd order a Reyka and tonic with a squeeze of lime, then go and sit in the hot tub and wait for the Northern Lights to roll in.

You're a stylish guy. What's your favourite piece of clothing in your wardrobe?
I have a couple. I'm very partial to a leather jacket. There's a particular Armani leather jacket, which it fits me so well and is itself such an elegant piece of tailoring, that the combination of the two is just great. It's somehow perfect in every weather, so I can wear it in the summer and it's not too hot, and I can wear it in the winter and it keeps me warm. It just feels great. However, I'm very partial to a suit - and Giorgio Armani made me a three-piece suit for for the release of War Horse. I was going to wear it to the premiere, then I found out it was black tie because the Duke and Duchess of Cambridge were attending! So I ended up wearing it another time. But on the inside pocket it's inscribed to Captain Nicholls, my character from War Horse. I think it's really special.

Are you looking forward to London Collections: Men?
Absolutely!

Your War Horse co-star Benedict Cumberbatch walked for Spencer Hart last season.
I know - Benedict and his braces! Actually Benedict is a friend of mine and I know he's talked about it, but I do think it's a really creative industry. Maybe both of us a little bit later in life are starting to understand style. I think it comes hand in hand with having a visual imagination. When you work in film, you begin to understand that how people construct themselves is fascinating, and can often tell you a lot about who the person is. Benedict talked about working on Tinker, Tailor, Soldier, Spy and the tailoring of that particular time [being an inspiration] but it's also simply that if you work with great filmmakers and cinematographers and costume designers, you start to understand there is a delight in the beauty of a beautiful shot or a beautiful picture. If people look good in the picture then it helps!

What are you looking forward to in 2013?
At the moment I've got a blank canvas, and I've been quite deliberate about that. I'm really pleased. It's been so long since I've been able to turn the corner into empty, open road. I know something great will happen and I was kind of waiting for that thing where you just fall in love. You fall in love with a possibility - a film, a character, a project - there's no self persuasion. It's just "I have to do that, and that's where I'm going."