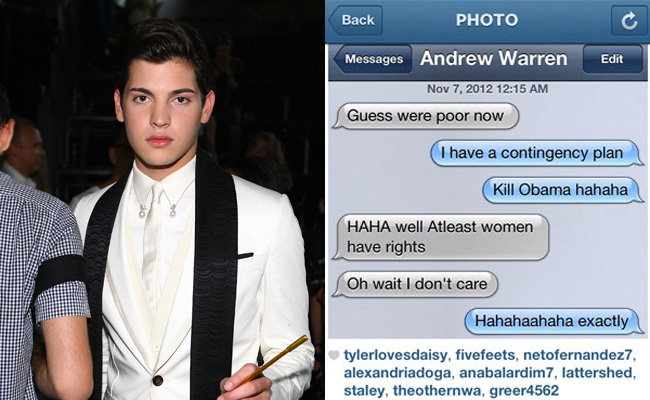 I am not normally one for exercises of state power. However, I feel it might be warranted for the FBI to bust down the door to this kid’s mansion and teach him a valuable lesson in manners.

Peter Brant II, one half of an entity known as “The Brant Brothers,” had a rather predictable response to Obama’s win, for a 1%-er: he wasn’t happy about it. (For those who don’t know who The Brant Brothers are, I envy you. But if you insist on finding out, they’re the foppish, decadent-late-capitalist, teenage sons of Stephanie Seymour and Peter Brant I, and are famous primarily because the media fucking hates you.)

For those wondering who this is, he is the kid of supermodel Stephanie Seymour (of November Rain fame). You may recall him from this questionable photoset posted in ontd last year. Him and his brother also had a really embarrassing spread celebrating them for presumably doing not much more than falling out of a rich vagina. And he is just as much of a privileged shithead as one would expect.
Subscribe