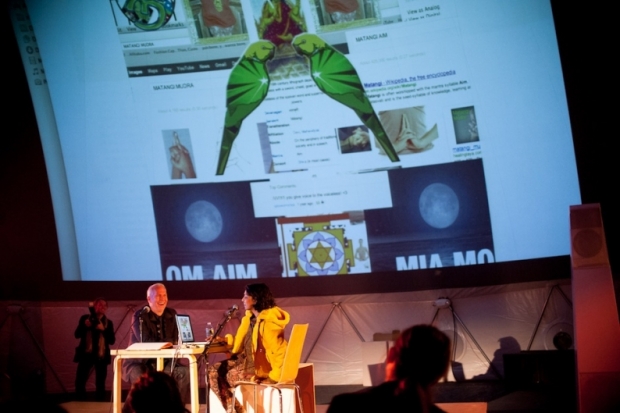 M.I.A. was once deeply in love... with the Internet. Her 2010 studio album, /\/\/\Y/\, was the story of her painful breakup with the world wide web, Maya Arulpragasam told an audience at the Queens outpost of the Museum of Modern Art yesterday, during a discussion to promote her new book M.I.A. Her trust in the digital realm was shaken, she said, by the Sri Lankan government's assertion she was a terrorist, which allowed authorities to tap into her online life — her bank accounts, her MySpace profile. But her flame for the Internet was rekindled: partly by her attempts to "bring punk to the web" via the design of her N.E.E.T. Recordings page, and partly by her decision to go on a quest for enlightenment.

"I said, 'Fuck it, I'm out of here, I'm going to go get spiritual,'" M.I.A. said, to some laughter in the MoMA's dome, where she projected images from three laptops on the walls to chart her artistic progress from her early days in London through the present. She left America, went to India, and admits, "I fell back in love. I found spirituality through the Internet."

Arulpragasam says that's the story behind her upcoming album, Matangi, which has been delayed past its expected December 2012 due date (she declined to specify until when). Maya repeatedly said she wasn't going to discuss her latest music but decided to show the audience one image, which she said was "spirituality on the Internet as it happens." It appeared to be a Matangi mood board of sorts, whose central focus was two green parrots, which M.I.A. identified as key.

"I was searching for parrots on Google and I found Matangi, who is parrot green," she explained. Matangi is a Hindu wisdom goddess who happens to share a name with M.I.A. — the artist's first name is Mathangi, and as she told the audience, she'd always believed her mother had randomly assembled her name out of a collection of letters.

Her interest in Matangi grew as she learned more: Matangi's mantra is "Aim" (a.k.a. "M.I.A." backwards). According to Arulpragasam, Matangi is the goddess of spoken word, fought for the purity of information, and represented the Untouchables. "I didn't go to an ashram," she said, "I went to India to Google parrots."

M.I.A. didn't elaborate further about the musical direction of her fourth studio album, but it promises to be fiesty. When an attendee asked how she felt about her portrayal in the media following the Super Bowl, where she appeared alongside Madonna and infamously flipped the bird, Arulpragasam replied, "You'll have to wait for my new album." The LP, she stressed, is far from mixed and mastered. She said she's still recording it, and was heading to India the following day "to add more stuff to it."

"It's not 'I want to be trendy,'" she said of its sound. "I just want to make music that makes sense."

When SPIN spoke with M.I.A. in May, she said she'd gone to India after her Vicki Leekx mixtape to find a creative spark: "My trip to India was to kind of explore the visual arts thing a bit more and while I was there I was coming across lots of things that were inspiring and I was recording initial bits of drums and things like that for the record — just because I was there and I was inspired to do that. But I didn't 100 percent think I was just gonna make a record." In an impromptu Twitter Q&A with fans in December, she declared the LP's genre was "paul simon on acid" and that she wasn't going to be pulling punches.

"No one in the industry collected blows in the last 3 years as much as me," she wrote. "This [Matangi] is a fuck you to them and a thank you to you."

roguewave3
November 6th, 2012, 05:25 am
Oh my god... I think that I'm so sick of waiting that I subconsciously skipped over the past it's due date part. lol smh

Of course not. She wants to be completely one of a kind unique.
That said, I love her music.

popslove
November 6th, 2012, 04:21 am
I found spirituality through the Internet.

prophecypro
November 6th, 2012, 05:22 am
That album aint coming out. The Interscope did her wrong

sviibwhapp
November 6th, 2012, 05:49 am
she should just stick with XL. Don't bother with Interscope. They are a bunch of posers.

kipperbloomer
November 6th, 2012, 05:27 am
her upcoming album, Matangi, which has been delayed past its expected December 2012 due date (she declined to specify until when)

Does this mean it's not coming out in December? Ughhhhhh I feel like I've been waiting forever.

But whatever, I love her and can't wait for a new album.