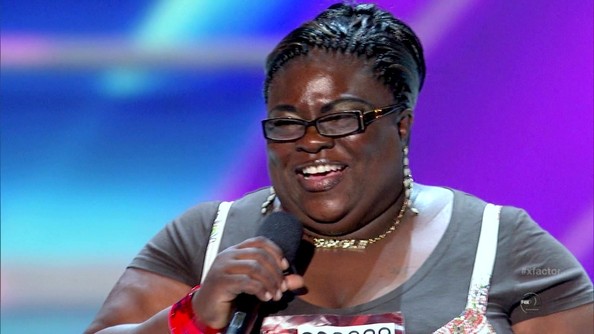 A few weeks ago on "The X Factor," a lovable lady by the marquee-worthy name of Panda Ross captured America's hearts--and seemingly the heart of her longtime crush, Simon Cowell--with her huge personality and huge voice. "You sound like a legend," Simon told Panda, before he and his fellow judges unanimously decided to advance her to the Boot Camp rounds.

And then...Panda was never heard nor seen on TV again. America never got another piece of Panda. "The X Factor's" Boot Camp episodes continued, as the contestants were whittled down from 120 to 60 to 24, but Panda's "Fandas" didn't get another chance to see Panda perform, nor did they ever find out what exactly had happened to her. Considering that the last time Panda appeared on the show, she was being wheeled away from her audition by paramedics (due to a pneumonia relapse), viewers had to wonder--and worry--if she'd even made it safely to Boot Camp in the first place.

Well, Yahoo! is happy and relieved to report that Panda is alive and well--and 60 pounds slimmer, thanks to recent gastric bypass surgery--and she did recover from her illness in time to attend to Boot Camp. But why wasn't her time at Boot Camp shown? That's a bigger mystery. 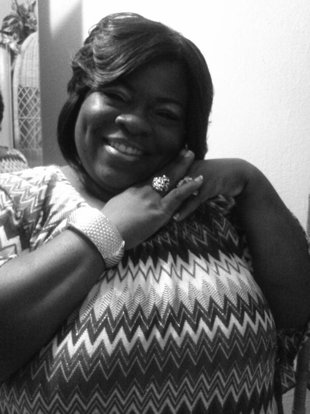 "I'm so glad that you asked that question, because I'm wondering the same thing. Like, what happened?" says Panda in an exclusive Reality Rocks interview, discussing her bizarre lack of screentime this season. "But to be honest, my friend kind of pre-warned me that I might not get shown much. She said, 'Panda, don't get upset if you don't see yourself on TV, because you have a personality that's larger than life. So if they were to continue to show you on the show--and you're not the person that they're hoping to have win--they wouldn't want it to turn from the X Factor Show to the Panda Ross Show!'"

So here's what all the Panda Fandas watching at home didn't get to see: First, Panda performed a Boot Camp solo of Jennifer Hudson's "Love You I Do," which she basically turned into a serenade for her number-one "boo," Simon. "I had Simon as red as...I don't know, I'm just trying to think of the shiniest red thing I can think of! I just did the Panda Ross thing," she laughs. This was enough to get Panda through to the next stage, at which point the remaining contestants sang in groups. (Note: Hardly any of this season's Boot Camp group performances, by any of the contestants, were aired.) Panda remembers that she was completely unfamiliar with her group's number--shockingly, the Beatles' "With A Little Help From My Friends"--and that she "felt crazy because everybody knew that song, and I had to stay up all night to learn it. But I did awesome with it. I made sure that I threw a little classic Panda Ross in it. I took my hair down, and when it came time for me to sing the line, 'Could it be anybody,' I was looking straight towards Simon. I walked off and I was like, 'I nailed it!'"

Panda says she was confident throughout much of her "X Factor" stint, admitting, "I was really thinking they were gonna pick me. How could you not pick me? I don't know if I ever thought I was going to win, but I just really thought I'd land in the top 12." However, immediately after her group performance of the Beatles' classic, Panda did develop some doubts, and she started to get a premonition that her time was up. "Fear did kind of grip me, and I went outside and I started crying," she recalls. "One of the camera guys came up to me and asked me what was wrong, and he was like, 'What are you sad for? You did a good job!' Then I said, 'If they send me home, I'm not mad, I'm only disappointed, because I have a story to tell through my music and through my testimony.' And then about 30 or 40 minutes later, they called my name with some other people. I went back onstage, and when I saw the other people I was up there with, I went, 'Aw, man. They're really gonna send me home!' I knew it."

Panda is still confused as to why she didn't go farther than the top 60, or why she didn't get more screentime, and says, "If my fans would have gotten to see me sing, they would have wondered the same thing I did: 'Why in the heck is she going home?'''

When asked if, at age 42, Panda maybe didn't fit in with the very young demographic that "The X Factor" is clearly aiming for this season, she answers: "To be honest, I'd never even thought about that. I've always thought it was an equal-opportunity show. But as I start looking back, I am wondering, why do they make it seem like an equal-opportunity show, when in reality they're not going to give a chance to people who are older? Do they think we're just washed up? You could tell that they weren't looking for that. I don't know what they're looking for. But I won't say they're not looking for talent, because obviously there is still a lot of talent there."

Panda wonders, based on conversations she's had with a shall-remain-nameless contestant who did make the yet-to-be-announced top 16, if she just wasn't pop enough. "I won't say her name, but I have a friend of mine and she's definitely in that group, and they keep telling her to sing songs that are not her style. They keep making her sing all pop, and she don't wanna sing all pop! So she's going through her own frustrations as she goes to the live shows, because yeah, it seems like pop is what they want," Panda muses.

But Panda says she harbors no hard feelings--not even against Simon. "I will always love Simon. Now, right now, he's bruised me a little bit, but he's still my boo!" she chuckles. "Every time I look at that video of my audition, I still think, 'Simon wanted me!' You know he likes black women. Don't play!"

So what is it about Simon that Panda still adores so much? "Simon's just sexy," she gushes. "I'm this strong black woman who's always been single, and I've always said, when I get married one day, I'm gonna need a strong man that can put me in my place. Because right now I'm bull-headed, and I'm used to wearing the pants and the dress. Watching Simon on TV, I said, 'That's the kind of man that can keep me in my place. He will make me SHUT UP and humble myself!'"

While Panda jokes that she'd still have a chance with Simon if he got a look at her new, slimmed-down physique ("He ain't seen me lately! I'm definitely a lot sexier. I was big and sexy then, but he'd definitely be all over me now!"), she knows it's time to move on to bigger and better post-"X Factor" endeavors. She says she probably wouldn't audition for "The Voice" because "if I went on the show and made it, it'd be like a slap in my boo Simon's face," but she's currently working on her own music and investing a lot of time in her YouTube channel (which features an amusing original ode to Simon called "Panda Pie"). She even reveals that she's already had "a couple of offers," but what she's "really waiting for is that call from Tyler Perry! I already have a whole script in my head about a show we could do together!

"But the only thing that I will say is, regardless of what happened, I am definitely grateful for the opportunity that 'The X Factor' gave me, and I'm really happy that Simon called me a legend," she stresses. "Just that statement alone has placed me all across the map. So even if I can't see it right now, I know that the doors are opening up for me. And even if people won't see me on 'The X Factor,' people are going to see me all over the world, on marquees everywhere. You have not seen the last of Panda."