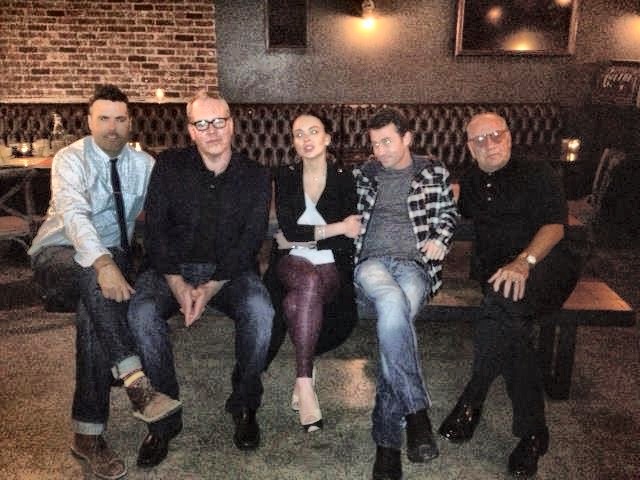 Well, perhaps in some ways it is a comeback since she had actually been gone for awhile. And now that we’ve wrapped THE CANYONS, it is probably a good time to answer the question that everyone keeps asking: how was Lindsay Lohan?

I can start with a short, declarative sentence: she was good. Very, very good. But the question with Lindsay has never been her acting skill which people sometimes forget, nor her range or her ability to apprehend the truth of a role. It has always been about a lifestyle that has overwhelmed her professional experiences and interrupted a career that could so easily take her wherever she wants to go. Lindsay, I think, is emblematic of modern celebrity. There is a lifestyle and media fascination and strange symbiotic relationship with paparazzi that are at once the eleventh biblical plague (after locusts, lice, incurable boils, darkness), a swarm of pestilence recklessly tailing her and violating all reasonable privacy expectations and rules of the road while a great amplifier of fame.

It would be inappropriate to speculate on some of the forces at play in the Lohan landscape and it is weird to get calls from media outlets asking very personal questions about Lindsay and her family as if nothing about Lindsay could be personal at all. So, we’ll stick to the filming process and the work and what she accomplished on the film and let the gossip gears grind on their own. (With a brief thanks to Dina for the popcorn and beverages at casa Lohan while Lindsay was getting ready for some nighttime filming).

There is no question that Lindsay channels stars of an earlier era and has classic cinema fluency. We were sitting at one of our locations, The Churchill, and she was getting ready to go upstairs to film the final scene and she cited Veronica Lake (the iconic noir actress who was the model for Jessica Rabbit) as an inspiration for her particular mien. Maybe it was being in Palm Springs recently where Marilyn Monroe is alive and well, looking at me from my hotel room at the Riviera, from the lobby of the Saguaro, a giant Marilyn statue on the main drag, or maybe it was Schrader’s interest in the John Huston film "The Misfits," Marilyn’s last completed film as well as Clark Gable’s, but you can’t help but feel some parallels between Marilyn and Lindsay.

It is impossible to not be impressed by Lindsay’s command of the script, her ability to run off pages and pages of dialogue flawlessly, her active and vital engagement in the storytelling, in camera angles, in the mechanics of filmmaking. She is extremely alert, likely in part from acting at such a young age. And, like Marilyn, there is an affinity for the camera. Lindsay looks great. She is what the French call ‘La Femme Eternelle.” She has a beauty, a facial architecture that is naturally stunning and best suited for capture with the least amount of makeup. There was a continuing dialogue between Schrader and Lindsay and her talented make-up artist David Hernandez about which makeup schemes to use, and production always advocated the same thing: less is more. We wanted Lindsay to just be Lindsay. Hard to see how you could improve on her natural beauty. That combination, her dramatic skill (Marilyn of course wanted to be taken seriously as a dramatic actress because of her success with lighter, comic fare and Lindsay I think having grown up in big, commercial, mainstream Disney family films also aspires to demonstrate her mature talent) and her beauty puts in her in a rare category. Elliot Erwin said of Marilyn, “the camera was crazy about her…it was hard to take a bad photo of her.” And so it is with Lindsay. Working with an auteur like Schrader, in a finely observed, dramatic and dimensionalized script by Bret Ellis, showcases her in a new way.

Gone is the vulnerable, sweetly disposed tween of "Mean Girls." Schrader terms the current Lindsay as ‘brassy’ and I think her husky voice and command of the screen evokes a certain toughness adding depth to her beauty. Add, of course, her charisma, that sine qua non of a true star, and that is what you get. I think she could be brilliant in a classic film noir.

So, did I say good? She was actually great. Not that the shoot was without its challenges. Do I want to drive in a car with Lindz?

No. No I don’t. Ever. Of course, with Schrader’s maniac driving the jury is out and whom you least want a ride from on the production.

But would I make another film with her? Absolutely. And I can’t wait to finish post and for the world to see her performance and the chemistry between her and her fellow actors in a film that tries to circumvent the traditional studio model. "The Misfits" commenced after John Huston struggled with a film he was trying to make about Freud, unable at the time to prune a dense, lengthy script by Jean Paul Satre. It was made on the margins of studios battling competition from television. Let’s hope that "The Canyons" is blessed with more good health and luck for its participants. I think people will really enjoy the completed film—Schrader is completely on top of his game—and I am excited for the next chapter in Lindsay’s career.