The Avengers Tagline Stirs Up Controversy in Japan 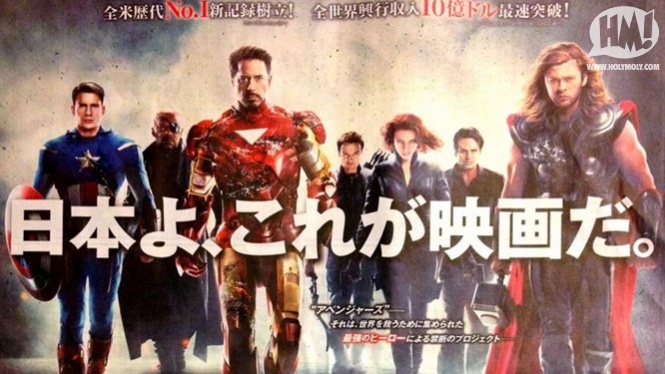 The Avengers isn't out in Japan yet, but will be later this week. However, the flick's Japanese tagline is making a few people at least very, very upset.

In Japanese, the film's tagline is 日本よ、これが映画だ or "Hey Japan, this is a movie". While some might think that seems innocuous enough, a couple prominent individuals have pointed out the tagline's more nuanced meaning. But is this much ado about nothing?

According to novelist Toshihiko Yahagi, "Having an American say, 'Hey Japan, this is a movie' is deeply unpleasant. I swear that there is no way I'm going to see this film." Yahagi mentioned how the tagline not only deeply offended, but angered him.

Not one to mince words, Yahagi even said that if it were a Japanese individual who wrote this tagline, he'd want to smoke him or her out and take action. The novelist also pointed out how in years past, Captain America, who is featured in The Avengers, was an asshole who proudly killed Japanese people in his comics.

Yahagi's reaction probably seems, well, extreme. Of course, there were those who agreed that this slogan was particularly bad, with some saying that this is just how Americans are. But on 2ch, Japan's largest web forum, some commenters thought that his reaction showed some sort of inferiority complex or that it was silly to get upset by a tagline—especially a tagline that was most likely thought up by a Japanese person!

Others said that the Japanese film industry has seen better days and that The Avengers should be judged on its merits as a film and not by its tagline. (One individual said it would be interesting to see if 2ch had the same reaction if this had been about role-playing games—implying that 2ch commenters would have probably been pissed off!)

Columnist Takashi Odajima did a much more eloquent job of arguing why the tagline could come across as unpleasant. He explained it would be like colonialists saying to native people, "Hey native people, this is culture." The other example he gave was The New York Times saying, "Hey Japan, this is journalism."

If people are going to be upset, that's certainly their right to be upset. If other people don't care, then that's also their right to not care. A tagline causing this much discussion is, as one 2ch user jadedly snarked, "a huge success".

The tagline also has sparked a reaction in the Japanese film industry—a clever one at that. Game creator Hideo Kojima, who I don't think has expressed an opinion on this one way or another, spotted an amusing ad in a newspaper; Japanese film The Kirishima Thing is using a new tagline: "Hey Hollywood, this is a Japanese movie". At least some have a sense of humor over the whole brouhaha.

The "Hey Japan" tagline, however, continues to be used and can be viewed on the movie's official Japanese site. The Avengers opens this month in Japan—all along the way, reminding people that it is a movie.