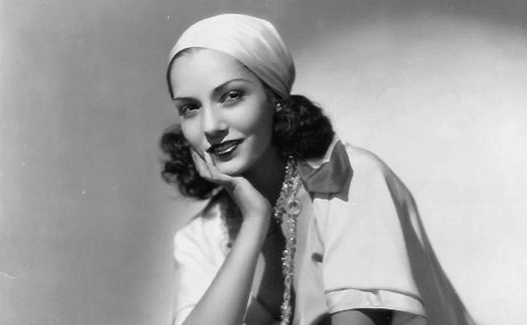 Classic film actress Lupe Vélez was a dynamo whose talent popped off the screen. The Mexican-born beauty, who came to fame in Douglas Fairbanks' 1927 adventure, "The Gaucho," could do anything — comedy, musicals, drama.

Vélez may have paved the way for Latino actresses who followed her in Hollywood, but her career ended tragically.

Lupe had numerous affairs, including a particularly torrid one with a young Gary Cooper, and a tumultuous marriage to "Tarzan" star Johnny Weissmuller. But in 1944, at age 36, she found herself pregnant with the child of a little known-actor name Harald Maresch, who would not marry her. A Catholic, Vélez wouldn't have an abortion, but she also couldn't handle the shame of being pregnant and unmarried. She wrote a suicide note to Maresch and took 80 Seconal pills. 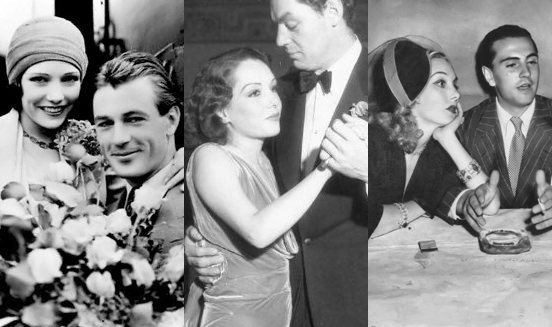 Lovers: Gary Cooper, Johnny Weissmuller, and Harald Maresch
Her suicide note blamed him and when that information came to light, any future career that he may have had in Hollywood was over. Despite the fact that Maresch emphatically claimed that it was all a misunderstanding and that he loved her and he did intend to marry her, it was too little, too late. Lupe Vélez was dead, and Harald Maresch was the reason! He returned to Europe and was barely heard from again.

Lupe Vélez died in her bed, as she intended. Eighty Seconal pills washed down with a glass of brandy took the life of her unborn child…and herself. Suddenly, the world knew that the woman who didn’t care what anyone thought of her or her antics had a breaking point. The shame of an unplanned pregnancy, and out of wedlock, was too much for her to bear.

Her suicide note read:
"To Harald: May God forgive you and forgive me, too; but I prefer to take my life away and our baby's, before I bring him with shame, or killin' [sic] him.  Lupe."

Vélez was discovered by her secretary in her bed surrounded by flowers.

Her death took a sordid spin some 40 years ago when Kenneth Anger proclaimed in his controversial book "Hollywood Babylon" that Velez had in fact been found drowned with her head in the toilet, and that account took hold as a salacious urban legend. Vélez has even been the butt of jokes on the NBC sitcom "Frasier" and Fox's animated"The Simpsons." The details in the book was dramatized by Andy Warhol and Edie Sedgwick, who also died after overdosing on pills.

"Lupe Vélez was a very complex person," Vogel said in an email interview. "She was, most likely, undiagnosed bipolar. Hollywood, with all of its luxuries and trappings, only served to heighten her personality. She was always manic, extremely high-strung. As a result of her moods, she had knock-down, drag-out fights with the men in her life, and even with some of her female costars." 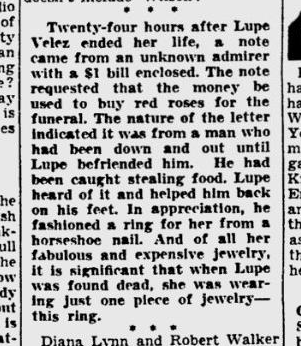 The actress, Vogel said, "had no filter, and in those days, when studios expected their stars to convey a public image that was respectable, Lupe Vélez said what she thought, often without thinking about the repercussions."

Vogel believes Vélez's bipolar disorder may have played on her suicide. "Her hormones would have been raging because of the pregnancy, no doubt setting off thoughts and feelings that were once again exasperated further by her mental illness."

Vélez's heyday was the early 1930s, when her saucy persona was a perfect fit with the sexually open pre-code movies such as 1932's "Kongo" and "The Half-Naked Truth."

"She did the Mae West thing, which is to say pushing the boundaries of what you could do or say in a film at a time when Hollywood was trying to police itself," said Charles Ramírez Berg, professor of media studies at the University of Texas at Austin and author of "Latino Images in Film."

But when Hollywood's production code was enforced in 1934, Vélez struggled. She appeared in forgettable "B" movies, returned to Mexico for a film and did a short-lived Broadway musical. She starred from 1939-43 in the popular RKO "Mexican Spitfire" comedy movie series, in which she played Carmelita, a stereotypical Latina who spoke in a heavily accented "Spanglish" that was peppered with malapropisms.

Lupe as Carmelita (with Leon Erroll) in "Mexican Spitfire Sees a Ghost" (1942)
Still, said Berg, she made the most out of the role, proving she was a great physical comedian. Velez also managed to ad-lib some lines in Spanish in the films.

"It was just a couple of sentences, but what she is doing is talking to us Latinos in the audience, in a way winking at us and making us part of the film's conversation in a real interesting way," he said. 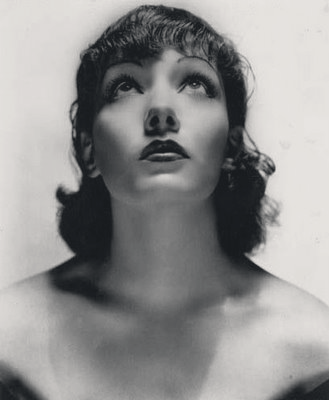