As seen in our last episode, "August Man" featured that guy John Cho on their latest cover. In his interview with the magazine, he talks about life after his ADORABLE BB, fanboys over Colin Farrell (while subtly shading the Total Recall remake), warns about the new and insidious prevalence of "anti-stereotypes" for minority roles in Hollywood, and looks suave as fuck in various formal and outerwear. 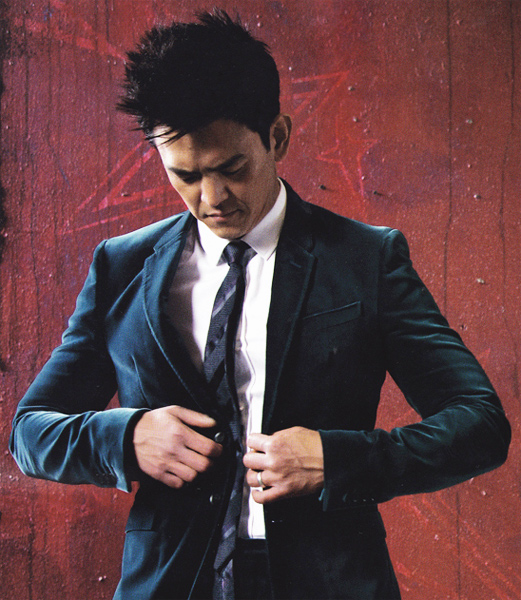 IT'S HARD TO FIGURE OUT how to go about interviewing John Cho. Should I be serious, and tackle important issues such as the Hollywood portrayal of Asians, or go Harold and Kumar on him? As it turns out, both issues turn up in the interview.

August Man: Let's start with A Very Harold and Kumar 3D Christmas. The guys have sort of drifted a little bit and you've come back to each other. In your personal lives, I think you and Kal Penn have also moved on a bit.

John Cho: Yeah, I guess we have moved on. You know, the beauty of these characters is that they seem to move on with us. They get older, and like this one, Harold is married and trying to have a baby and all that stuff. So I think it's essential in maturity, and good for the characters. It gets funnier the more mature their lives are, you know?

AM: That was the last of a three-picture deal though. Are there plans for a fourth?

JC: You know -- well, not unless something changes. I don't know, no one told me that there will be a fourth one. I wouldn't be surprised if in a couple of years somebody brought it up, and it might be interesting to revisit these characters when they're older, but as of now, I haven't heard anything like that. I think, theoretically, it would work with them getting older, because I think the comedy would benefit from the circumstances getting more mature.

AM: Definitely. In your own life, you've gotten married, you have a kid now. How's life changed for you?

JC: I have a typical answer. I mean, number one, your job in life is not really 'you' anymore. You're not a priority in your own life. So that's an adjustment, but it's a happy adjustment and it's an intense adjustment, and it's sort of all-at-once and overwhelming. It's not in steps, because once the baby comes, you've got to reorganize everything. But on the other hand, it's a relief to not be living for yourself anymore. It's cool.

JC: Oh, yeah! I think most people come to a point in their lives when that becomes enjoyable. I guess, as people get older, if you give them a choice of fun or worthwhile, when you're young, you would choose fun. But when you get older, you'd prefer to see something worthwhile over fun. I do think a kid is the ultimate expression of that.

AM: Okay. So what was John Cho like before marriage and a kid?

JC: I was a murderer, drug addict, and a racer. (laughs) No, I don't know what I was like before. I was certainly a little even more self-obsessed, maybe. But I mean, you're still you. It's just another direction.

AM: All right, let's say you do make a fourth Harold and Kumar film. What would you want to happen in it?

JC: Hmm. You know, this whole getting older, family stuff, is coming to me. Kumar having kids. I think something with a kid would be fun. But although I haven't worked with a baby yet, I think that might be difficult. The concept of Harold and Kumar having to take care of children is hilarious to me.

AM: You're in the new Total Recall film. Can you tell us a little more about it?

JC: Well, it's a remake of the 1990 film. Paul Verhoeven was the original director and this remake is like the original, but I think primarily, the difference would be that a lot of the technologies are updated, and special effects have come a long way. I think it's really interesting to see Colin Farrell go at it in the main role of a guy who doesn't know who he is. He brings a really fresh take with what he does with the role. [lol bless him for valiantly trying to sell this mess]

AM: It's not a complete reproduction of the original in that sense. It's really a fresh new take.

JC: I think artistically and stylistically, a pretty fresh take. It's going to be different from the original, because Paul Verhoeven has been a director with such a unique personality that whatever he did was going to stand out. 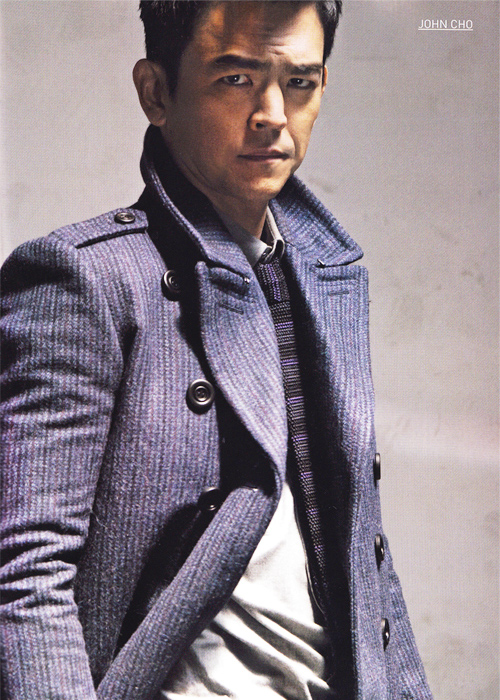 AM: In a sense, it's almost similar to what happened with Star Trek. It was a new take on things, which is good because it gives a new, fresher look. Did you, the cast and crew, ever feel like you were trying to live up to the original film at any point?

JC: That's not my burden to carry. [werq!!] In Star Trek I felt that a little more. In this film, not so much, because of the role I play. Star Trek was heavier in the sense that there were so many iterations, all the movies and multiple shows. It felt like there was more heat to do it right. But in this one, having been through [Star Trek], it didn't feel as intense, for me. Maybe the filmmakers did.

AM: How was it, working with Colin Farrell, Jessica Biel, and Ethan Hawke?

JC: You know, I think it was Colin Farrell that I was just really pleased to watch and learn from. Really excellent actor and extremely hard worker. I have found that a lot of these very successful movie stars may have different methodologies, but one thing they have in common is they tend to be real workhorses. And Colin Farrell is one of them. He's just very thorough, very talented, and I'm really privileged to have shared some time with him. [awww, fanboy. And none for Jessica Biel bye.]

AM: There's another Star Trek film on the horizon, I believe.

JC: We shot the second one, yeah. I don't know if it will come out till next year. I'm not saying anything about the plot, but we did shoot one.

AM: You were a schoolteacher after you graduated from Berkeley. [omg perf ;___;] How did that turn into an acting career?

JC: I taught for a year. I went back to L.A. to try acting, but found this [teaching] job. It's not necessarily that one thing led to the other, but it was just a day job at the time. In fact, I met one of my former students recently in New York. And he's a grown man with a beard, and a chef at a restaurant. 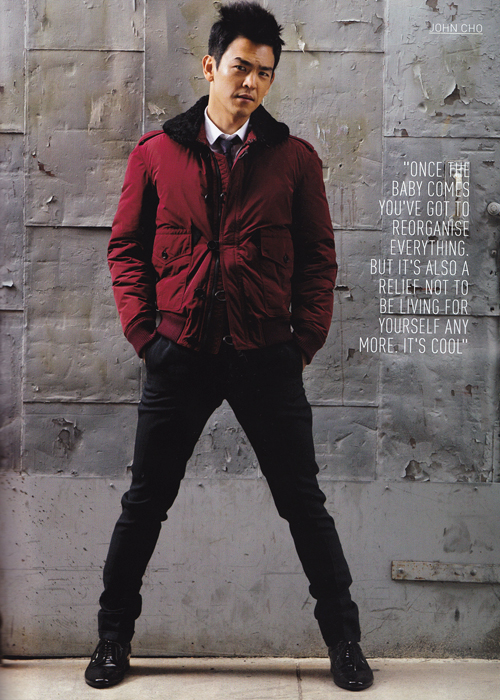 AM: Since the time you started acting, there have been more Asians in the entertainment industry. Is Hollywood today friendlier towards the Asian community?

JC: I think so. I think it has seen some movement. It's not where you'd want it be yet -- it certainly doesn't represent Asian buying power, or influence. However, it's gotten better, especially in the last five years. So it's a good thing.

JC: Well, fifteen years ago, I was incredibly pessimistic. And ten years ago, I was still pessimistic. But I have grown more optimistic about life. And I do think that, particularly what Asian cinema and stars and filmmakers have done, and really what technology has done, is to make people think globally and think "Okay, we're not going to rule the world from Los Angeles." We have to think globally. And when you're thinking globally, you have to think Asians. And so at some point, that will lead them on to different things. But you know, we'll see the progress.

AM: Do you still find that there are stereotypes in Hollywood today for any particular minority? Or is it every minority?

JC: Yes. It's rampant, and you have to be vigilant at all times. In fact, everyone keeps coming up with new stereotypes. [damn, keeping it real.] It's very difficult to find an original thinker in terms of casting when you're talking about race at all. And really, although more egregious versions of Asians have fallen by the wayside and become unfashionable, new Asian stereotypes pop up and they're really sort of anti-stereotypes that become stereotypes, if you get my drift.

AM: Tell us more.

AM: Does it mean that you have to work doubly hard to find scripts that you like?

JC: Yes! And it's annoying in the sense that you have to think about something that other actors don't. I'm always trying to look for things that, to me, represent forward movement, or not regressing. It's a challenge to think about what and where will make my community happy or unhappy. It's a complication. 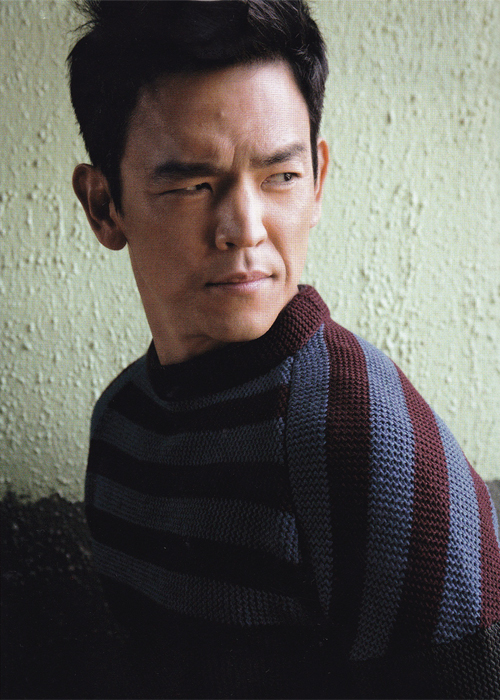 AM: So what would you say needs to change?

JC: What doesn't need to change? One thing that people can do is to be verbal. You know, Asians, Asian-Americans I can speak for, tend not to be vocal when they see something they don't like. We need to be proud enough to be vocal. Asian-American artists have to say no to these things, because that makes even more of an impression than people doing a letter campaign. It's going to take a really strong product from the American artist who's writing characters for Asians, for Asian-Americans. Ultimately, it's going to take money from overseas to finance co-productions that are invested, with an audience that's interested in seeing people who look like that. And that's Singapore, that's China, that's Korea, that's Japan. I think a lot of that muscle will come from overseas.

AM: Harold and Kumar sort of broke the idea of the stereotype in several ways.

JC: I think it did. I mean, it certainly put a spin on it and gave it something that people hadn't seen before. I think most importantly, Harold and Kumar is seen in many different ways. It's to some people a buddy comedy; to others, it's an art comedy; to others, it's an Asian-American film. But to me, the most important issue is that there are two Asian leads in that movie, and it's an American comedy. People don't even realize how extraordinary that is, considering when I came into town, there was a very strong prejudice against Asians being in comedies. They said Asians aren't funny, they're not a funny race, they can't make jokes. And for a trilogy, at this point, to be completed with Asians as the leads, is a remarkable social achievement, in my opinion. ◆ 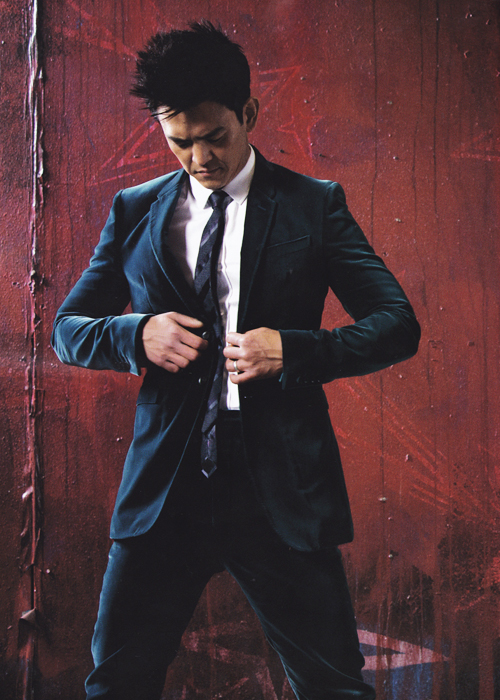