the poster for your next favorite tv show is unveiled!! 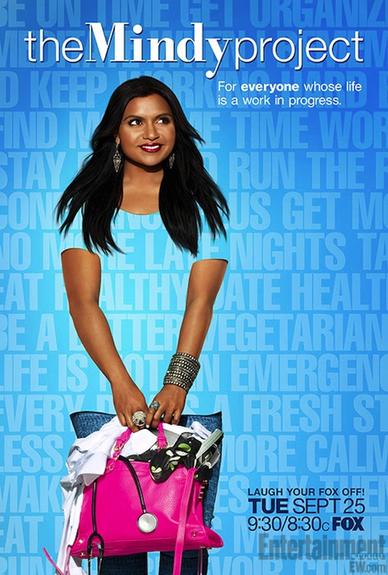 Joining Fox's Tuesday night comedy block this fall is The Mindy Project, a series that puts The Office star Mindy Kaling front and center in a half-hour show that looks like it'll pair nicely with returning comedy New Girl. The new poster for series features the star and creator surrounded by words that suggest she's on a mission of self improvement.

Kaling certainly looks good in blue, and it's a good thing as she's surrounded by it in this key art, which EW shared today. Set on the back (and partially-front) drop are words like "No more late nights" and "Be a better vegetarian," which go along with the theme of the series, which stars Kaling as an OB/GYN "navigating the tricky waters of both her personal and professional life" in an effort to become the perfect woman.

In addition to the words that enforce the theme of the comedy, it's worth noting that Kaling looks pretty fantastic, well accessorized and very happy. (I'm also loving the long hair). I'll miss her on The Office, but hopefully The Mindy Project will see the same kind of ratings success New Girl has. As the comedy follows the Zooey Deschanel-starring returning series, Mindy's getting a pretty good lead-in. We'll have to wait and see how she does.

Here's the trailer: (If you haven't already seen it!)


ONTD graphic designers, what are your thoughts? I personally am not a fan of the invisible torso look but I think she's looking gorgeous!! Super excited for this show.