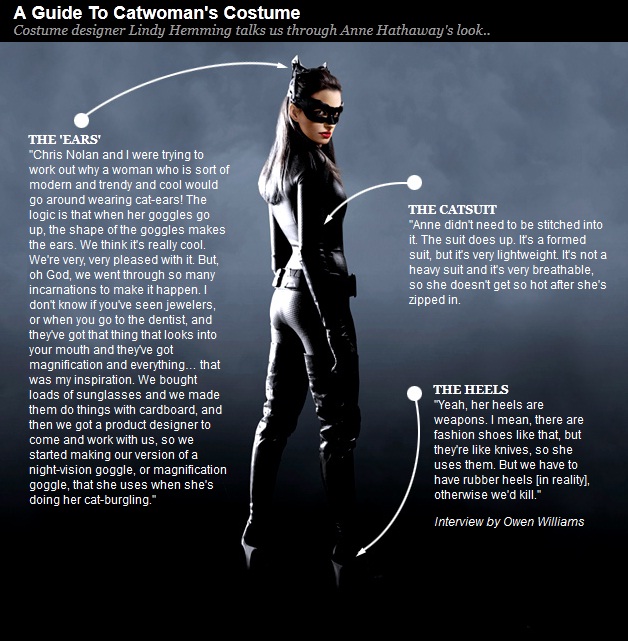 (Click for bigger image)
Tell us about your first meeting with Christopher Nolan about playing Selina Kyle.

It was in October 2010 and I had been hearing for a few months that there was going to be a new female character in the new instalment of the Batman franchise. Chris wanted to meet with me amongst, you know, scores of other girls - or women, however you wish to refer to us [laughs]. I was very nervous going into it, and there was some conversation about what the character was and everyone, literally everyone, I talked to said, "Well they're not confirming anything but I personally think it's Catwoman."

I just thought, "No, no, Chris isn't going to go for Catwoman! [laughs]". Because I'm the all-seeing oracle, apparently. I went in with one character in mind and after about an hour of talking he says, "Okay, so the part is Catwoman," and I had to try to, all of a sudden, completely switch from the one character that I was subtly trying to subconsciously make him think of to Selina. Who, thank goodness I'm a huge fan of. Chris and I talked for about another hour and then about three-and-a-half months later we did another screen test and the week after that I found out I had the part.

Was there anything in particular he mentioned he saw in you in your performances? Had he seen The Cat Returns for example?

You have Googled me! I love Ghibli. Sprited Away is one of my all-time favourite movies. Um, why did he give the part to me? Honestly I'm still scratching my head, so if you find out please put it in the article and then I'll know.

How would you describe your take on Selina Kyle? How does it differ from the last great one, by Michelle Pfeiffer?

How do I say this without sounding like a know-it-all? I think that Catwoman depends on the Gotham City she lives in. The characterisation of her is informed by the world around her. So what I sought to do with my Selina was make her part of Christopher Nolan's Gotham, just as I thought Michelle Pfeiffer's was very brilliantly a part of Tim Burton's.

What did you think of Nolan and costume designer Lindy Hemming's take on the costume? We liked the way those goggles flip up to form the 'cat ears'...

I got chills when I saw that. I was so happy they had such a clever solution to a really iconic but sometimes unnecessary part of the costume.

And those heels are steel as well, aren't they?

So they're weapons, presumably?

Well. I think you should see the film [laughs]. I think all queries are answered there.

Was the costume comfortable?

You can't ask yourself such questions when you're in the catsuit! It's not really one of the goals. It's not, you know, something I would choose to stay at home and watch a baseball game in, however... But it certainly got the job done and that's all that matters.

You've always played klutzes so well. It must have made a nice change to play a character who always lands on her feet.

Yes, it did. A lot of my other movies, the camera just happened to be rolling when I fell and my characters therefore became klutzy! [laughs] Were there any stumbling moments? There was one day where Christian... you know, they have a few capes for different camera lenses and there was one cape that was so long I kept tripping on it! The thing that I liked about playing Selina was that it wasn't confidence for the sake of 'girl power'. It was confidence for the sake of survival.

Her voice is significantly different from your own...

You mean I don't sound like a Muppet!? Everything about Selina has to be smooth. Except for her eyes. So everything was informed by that. I wanted to find a way of talking where it wasn't as on the nose as a purr, but where you have to lean in a bit to hear her. So in a way you're concentrating so hard on what she's saying that you find yourself trapped in the moment you're talking to her.

You've played flawed characters before, but how was it to play someone bad?

I must say you're assuming so much about her. How would you stand on a jury of her peers?

Well, she might not be pure evil, but she is a thief.

Hmm. Yes. Look, I like playing someone who has their own code. Any time you get to play a part that causes you to go outside yourself in any direction it becomes a real privilege.

The role must have been very physically demanding.

I did as much as I could do without exhausting my body so much that I couldn't sleep at night, which is a problem if you're exercising too much. Sometimes you won't sleep. But I kept it up to that point.

The movie is huge. How did it feel to be working on something of that scale?

Oh, it's the biggest thing [I've done] by far. This is a testament to Chris [Nolan]: once you get on set it is as focused and imaginative as any film. He doesn't behave like a man who has an untold amount of money at his disposal. Nothing felt like an unyielding monolith, or bloated in any way. It was an incredible, tight, efficient production. We came in under budget and finished ten days early. It was crazy!

There's much talk about him being a master technician, but what is he like as an actor's director?

He is totally available to you for whatever questions you have. That being said, the buck stops with him for every decision, so you don't want to pester him about every last detail. He lets you work a lot of things out on your own.

This is your first time working with Christopher Nolan and most of this cast is actors that have worked with him before...

I was thinking about this the other day. Am I the only newbie?

Yes, in terms of the top-line cast, you are.

So you want to know if there were any hazing rituals?

Chris Nolan doesn't strike me as a hazing kind of guy.

God, that would be the headline though! Not to sound wet, but it exceeded all my expectations, by so far. It was brilliant in ways I couldn't have imagined. But at the same time, when you know Chris and you that know he's always after the best - the best shot possible, the best take possible, the best cast possible - it makes sense. All the people I worked with on this movie were the best in their field, and working with people who bring that level of focus to their jobs is inspiring. It makes you put that much extra effort into what you're doing, because it's the sort of environment where it does pay off.

I can't honestly say I was surprised or shocked by anything, but every day was such a pleasure because I sort of felt that I'd stumbled into this mythic world that wasn't supposed to exist. Like everyone had given up their ideals long ago in this cynical, cynical world but here it was and it does exist, and now I know it and I feel stronger for the knowledge.

How does it feel to be the first true action woman in his movies?

Wonderful. I'm going to open a shopping mall! [laughs] No, I didn't think about it like that. It wasn't about, 'Oh I want to hang with the boys,' or, 'Oh I'm girl who's gonna beat these boys up'. I'm sorry to sound so serious about it, but it was all about the character. I realised I'd have to create a backstory for this character that made all of this seem unremarkable to her. It didn't matter what my feelings were. I just had to keep my head down and attack it like she would.

Did you feel any pressure taking on such an iconic character?

Yes of course! And if you took too far a step back and looked at it, it was pretty big. But the big thing is that I knew I had Chris' support. I knew that I auditioned for the character and that if he didn't think I could do it, then I wouldn't have gotten the part. So I had that little bit of confidence. Everyone was wonderfully supportive and I also knew that letting that kind of pressure cloud my thoughts wouldn't do me any good. So I just literally took it one day at a time: "OK, what's today? Shooting. And today? I'm going to train. And today? We have that big fight shoot coming up so I'm going to train..." You just take it one day at a time and try to keep it realistic and achievable.

And how was it working with Christian Bale and Tom Hardy?

Oh they're so wonderful, both of them! They are so fun to talk to! They covered everything from a completely original perspective - and a highly entertaining one at that. They're both sweet and kind and generous and fun and brilliant at what they do, and being around actors like that, people like that... you get bruises from pinching yourself so much.

Nolan has been very insistent this is the final chapter. Does is bother you that you’ll never return to this world?

I'm just excited that I got to be part of it, period. There's never been anything like this. I've not yet seen it, but I have it on good authority that this movie rocks.