That’s why we love the guy, of course. He breathes new life into the genres he touches by infusing them not just with a movie lover’s passion, but with the demented sensibility of someone who’s spent too much time alone in the dark.

When the trailer for Django Unchained debuted yesterday, it did not disappoint, delivering us 2 minutes and 36 seconds of antebellum peculiarity. Here are a few offbeat moments that jumped out.

“What’s your name?” asks the stranger in the white hat and purple ascot.

We never get an introduction from the stranger, who is hanging out in the parlor overseen by Leonardo DiCaprio’s menacing Calvin Candie, but the actor is Franco Nero (Vanessa Redgrave’s long-lost love in Letters to Juliet — and also her real life husband), who made his breakthrough starring in a 1966 spaghetti western titled, you guessed it, Django.

Tarantino is a well-known aficionado of obscure cult films, which often serve as his greatest inspiration, as director Sergio Corbucci’s Django clearly did for Django Unchained. Another Italian film from around this corner of the video store, 1978′s The Inglorious Bastards, served as a similar muse for QT. 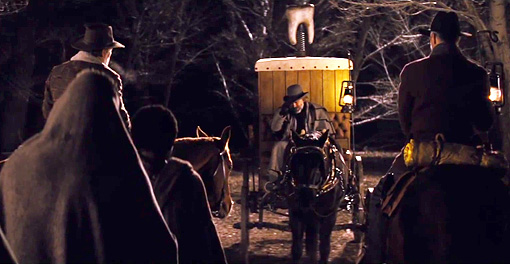 It’s only there for a second, but raises a “What the –?” reaction.

Christoph Waltz’s bounty hunter has a giant tooth wobbling around on top of his wagon. It isn’t until a few shots later that we see the side of his cart, emblazoned with “The Amazing Painless Surgeon Dentist Dr. King Schultz.”

Strange choice, but maybe he needs a cover story, or maybe that work helps pay the bills between human take downs. It’s kind of poetic, really. A dentist and surgeon goes into the body and extracts bad elements, which is apparently what Dr. King (a symbolic name if ever there was one) does to the denizens of the Deep South.

As EW commenter Daisyifyoudo points out, dentistry is also where we got the “doc” in Doc Holliday, which is nice allusion to a historic gunfighter by Tarantino.

Finally, I love the Christopher Walken-y way Waltz says: “Amongst your inventory, I’ve been led to believe, is a specimen I’m keen to acquire,” which comes out ah-KWHY!-er with over-the-top emphasis on that accented syllable.

Since this is Tarantino, maybe Schultz is an ancestor of Pulp Fiction‘s Captain Koons and helps Django escape by hiding him up his you-know-where?

The first shot of the trailer is of shirtless black slaves marching together through a desert landscape in a chain gang, and each back has its shares of gouges and scars. Then we see Django’s and it’s slashed to bits. Although he seems like a beaten man, something he did seriously enraged his previous owners.

When we see that back again, shedding the meager cloak he was wearing after Dr. King’s rescue, we see the scars again — only this time the muscles beneath them are flexing. This dude is ready for a rematch. 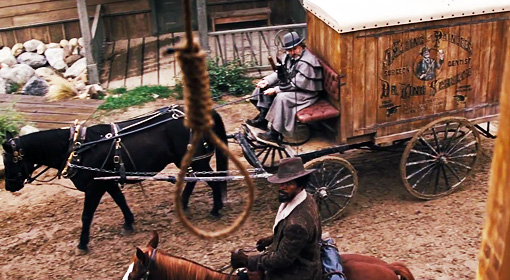 Whatever dangerous dealings Dr. King Schultz chooses to pursue, he is afforded protection by virtue of his skin color that Django is not. As they ride into this backwater town, danger looks down at them from every angle, but it is Django whose head is going straight into the noose.

A foreigner like Dr. King may be unwelcome around these parts too, but at least he can hope to pass among these huckleberries without drawing undue attention. There’s no way for Django to hide who he is, and it’s clear from just a glance that he doesn’t belong. The two partners are aware of this, and eventually Django begins to pose as Shultz’s valet.

It may be less dignified, but it’s sure a lot easier than explaining why a freed black man is riding by his side.

I’m not sure where Django gets that very cool (and very phallic) D emblem on his saddle, but it’s a nice touch.

It calls to mind Samuel L. Jackson’s Jules in Pulp Fiction, asking for his wallet.

“Hey, Django! Which saddle is yours?”

A Fight or Sex? 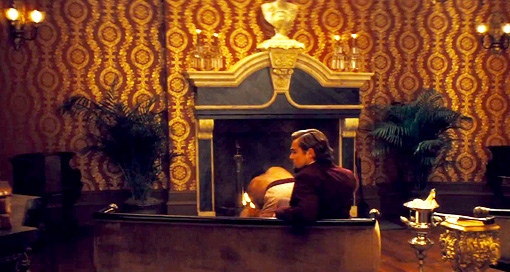 A lot of attention was paid to this Sergio Leone-style zoom in on DiCaprio’s sadistic plantation owner Calvin Candie the first time he appears in the trailer, but that obscured the weirdness happening right in front of him.

That may be intentional, because there are shirtless bodies writing around in front of that hearth. It’s impossible to tell who that is — at first, I thought it might be a topless woman scurrying away, having been rudely interrupted while servicing the delightful Mr. Candie.

Though it’s hard to determine skin tone, I now think that we’re witnessing him watch two black male slaves fight each other. You can see flailing limbs for an instant before the zoom in, so there is clearly more than one person there. Also, another man is on a couch off to the left, also watching the spectacle.

Foxx tells EW that Candie’s not-so-secret pleasure is watching slaves fight to the death. This may be a glimpse of that. 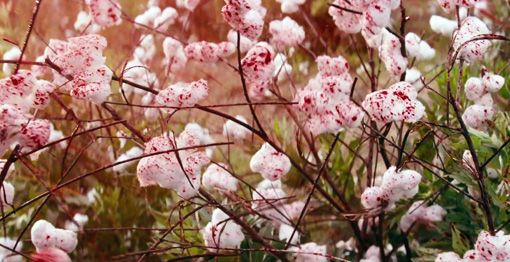 Given all the concern about how Tarantino will handle the issue of slavery, the colors that most fascinated me in the trailer were not white and black, but red and white — with this startling shot of a white man’s blood spraying all over unpicked cotton bolls.

It’s rare that you see this kind of blood in an MPAA-approved trailer, but the power of that shot is undeniable. Historians could argue that a lot of symbolic blood was spilled over the textiles these plantations helped produced, but Tarantino goes straight at it with a visceral, literal version of that. Only this time it’s the slave master’s blood being spilled, not that of the slaves toiling for him.

“Kill white folks and they pay you for it?” Django says. “What’s not to like?”

Now, I’m pretty sure Tarantino plagiarized that one from Hallmark.

He puts the lime in the coconut 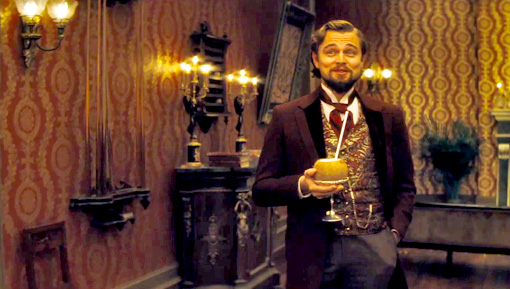 Seriously. Where does a guy in the Deep South in the mid-1800s get a coconut? And one he can sip through a nice little straw.

Candie must get them all the time. I mean, check out the cool little coconut-holding silver chalice he has.

“Gentlemen, you had my curiosity. But now you have my attention,” he tells Dr. King and Django. 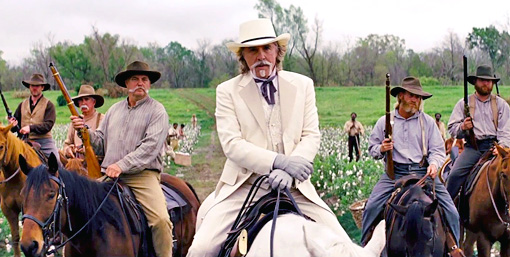 One thing Django Unchained can unabashedly boast is: See Miami Vice star Don Johnson as you’ve never seen him before!

Yes, that’s Crockett (or Nash Bridges, if you prefer) sporting the Steve Martin suit, a string bowtie, and some very, very old-school facial hair. As if you couldn’t tell from his dandified appearance, the character is sort of a scumbag.

His name is Spencer Gordon Bennet (not-so-coincidentally the name of a filmmaker who made Superman and Red Ryder serials in the 1940s), and he’s a plantation owner as well as a reputed pimp who sells his female slaves as prostitutes.

Let’s guess he comes to a bad end. 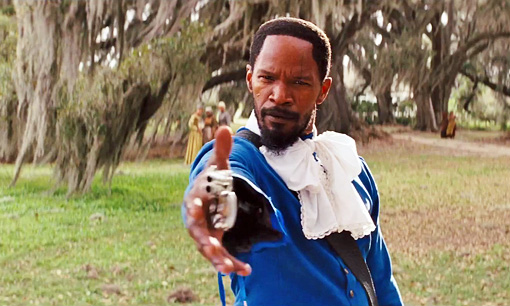 When Django accompanies Dr. King on his mission to find and kill the Brittle Brothers, posing as the valet means wearing a far-less-intimidating outfit than his usual cowboy gear.

This silky, azure outfit — complete with frills — recalls Thomas Gainsborough’s The Blue Boy, with the exception of the double-barreled derringer popping out of the sleeve.

Of all the indignities Django must suffer, this isn’t the worst. But it may be the strangest. And the funniest. 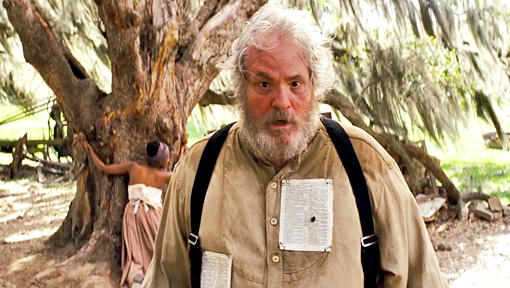 This seems like a major spoiler, but the trailer lays it right out there. When Django wastes this fellow (one of the aforementioned Brittle Brothers, played by Lost actor M.C. Gainey) we see that he has some pages pinned to his shirt. It’s impossible to tell, but they look a lot like Bible pages, with two columns of verses on each sheet.

“I like the way you die, boy,” Django says as he pulls the trigger, dropping Big John Brittle to the ground in a heap. A female slave lashed to a tree behind him has apparently been rescued from one hell of a beating.

The bullet went right through the Bible page pinned over his heart. Let’s hope it is Leviticus 25:44: “It is from the nations around you that you may acquire male and female slaves.” 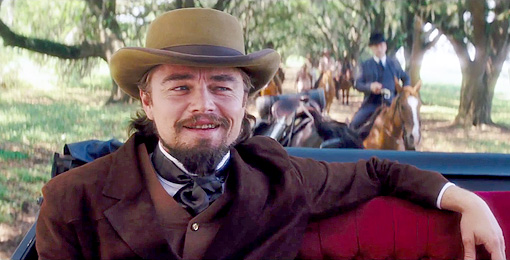 One of the weirdest moments is saved for the end.

“He is a rambunctious sort, ain’t he?” says DiCaprio’s Candie with a cackle.

A cackle. One that reveals a set of the vilest teeth imaginable. DiCaprio has always been an actor who tried to subvert his heartthrob good looks (at least, ever since he used them inTitanic to become a global star). Here, he accomplishes that with gusto.

He could really use a dentist. Know any good ones?

This looks good, idgaf. Can't wait to see it, and especially to see Leo.