Scandal Spoiler: Will We Find Out Who Quinn Perkins Is in Season 2?

Interview with most of the cast 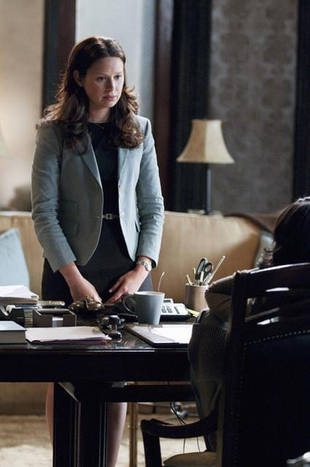 We don’t know about you, but last week’s Scandal finale (Season 1, Episode 7: "Grant: For the People") made us get on our hands and knees and start praying to the All-Knowing Shonda Rhimes for teasing us so much.

Wetpaint Entertainment: So who is Quinn Perkins?

Katie: Your best friend and your worst enemy. Season 2 you will find out.


We will for sure?


Columbus: Hmm you’re going to find out at the end of season 2.


Joshua: I think it’s going to turn out that she shot JR. There will be closure finally.


Are you going to find out a lot more about your characters in the second season?

Columbus: I hope so.


Joshua: If we do it will happen script by script. She won’t be sitting us down and saying, “Here we go.” It’s literally like being a fan of the show. You get the script and are like, “I can’t wait to see what happens.”


Darby: Yeah, you get the script and that’s when you find out.


Katie: She won’t tell you anything else.


So David and Olivia are getting along…

Joshua: It’s meant to be. All I know is in the pilot, Shonda made me take off my wedding ring and she said, “I might want to get you romantically entangled.” I said if you see any potential here, Godspeed. She didn’t say Olivia specifically. There could be an elderly woman or Darby.


But it could be. Would you like to see it happen with Olivia though?

Joshua: Oh God yes. For sure! Kerry would probably be less enthusiastic than I but sure. It would be great for me.


What would you guys like to see happen in Season 2 if you could write the script in your idea world.

Katie: Nothing we could come up would be as good as what they churn out. That’s what I feel. We try to come up with in the makeup trailer ideas and predict things and honestly Shonda Rhimes and everyone on the writer’s staff are so good. It’s always better than what you could think.


Joshua: What I would like to know is how much they know right now. Whether they’ve written themselves into a situation like, “OK. If we get picked up we’ll figure it out then.” And I wonder because I think they do that to themselves. I think Shonda kind of gooses her own writing by saying, I’ll make this happen and this happen and then I’m really going to have to figure it out. She’s brilliant at figuring her way out.


Are there going to be any plotlines like that which will be the main theme of the second season?


Columbus: We know nothing.


Darby: Nobody’s safe. I think the first season proved itself to that.


Kerry, you and Joshua are apparently shacking up in the next season.


Kerry: Well actually, I heard that Katie and I are shacking up. I’m having grilled cheese baby. That’s the only way I do it.


Darby: Abby will put you in your place really quickly!

Scandal will return with all-new episodes in the fall on Thursdays at 10 p.m. ET/PT on ABC.