London Mayor Boris sounds off on the BBC, wants next Director General to be a Tory

when politics and media meet... 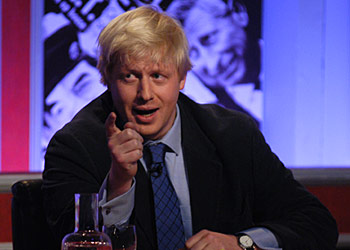 Boris, appearing on the television show that arguably helped get him elected
(HIGNFY, BBC1)

'So what do you think, eh?” I turned to the BBC’s art critic, the brilliant, bulging Professor Branestawm lookalike Will Gompertz. We were standing on the top of the ArcelorMittal Orbit in Stratford; London was spread beneath us like a land of dreams – was that France I could see in the distance? – and yet I was nervous. This sculpture is a masterpiece, far better and more rewarding up close than it appears at a distance. The steel loops are an arterial red, writhing and shifting against each other beneath the blue sky. Anish Kapoor already has many fans, but he has excelled himself with this vast fallopian ampersand, this enigmatic hubble bubble, this proud vertical invitation to London 2012.

The Orbit is a decisive assertion of the city’s status as the world capital of culture and the arts. That’s my view, anyway, and I am sticking to it, though I am conscious that not everyone agrees.

There are plenty of people who absolutely hate the thing, just as most Parisians initially despised the Eiffel Tower (and didn’t Charles Dickens campaign against the building of Big Ben and the Palace of Westminster?). I have heard it compared to a catastrophic collision between two cranes, a mutant helter-skelter, a mangled trombone, and worse. So of course I waited with bated breath for the verdict of the BBC.

Did Gompertz like it as much as I did? My friends, he did not. Or at least, he liked it, but he had two complaints. “It’s not big enough,” he said, “and surely it should be free.” Not big enough! Free! There you have everything that is wrong with the BBC and with this country. The thing is already colossal – about twice the height of Nelson’s column. If we went much higher we would have to re-route the planes out of City airport. And yes, it costs something to go up – though less than it costs to go up the London Eye – but what is the alternative? The alternative is that the whole operation would have to be subsidised by the taxpayer when it is one of the (many) saving graces of this structure that it has been very largely financed by private sponsorship.

In his criticisms, Gompertz was revealing not the instincts of an art critic – but the mentality of the BBC man. Unlike the zany eccentric ArcelorMittal Orbit, the zany eccentric Gompertz is almost entirely publicly funded. It is up to you whether or not to go up the Orbit – though I thoroughly recommend it. You have no choice about funding Gompertz. Everyone who possesses a TV has to pay more than £145 to put him on air. The BBC is unlike any other media organisation in the free world, in that it levies billions from British households whether they want to watch it or not. No wonder its employees have an innocent belief that everything in life should be “free”. No wonder – and I speak as one who has just fought a campaign in which I sometimes felt that my chief opponent was the local BBC news – the prevailing view of Beeb newsrooms is, with honourable exceptions, statist, corporatist, defeatist, anti-business, Europhile and, above all, overwhelmingly biased to the Left. LOL

Of course they are: the whole lot of them are funded by the taxpayer. Eurosceptic views are still treated as if they were vaguely mad and unpleasant, even though the Eurosceptic analysis has been proved overwhelmingly right. In all its lavish coverage of Murdoch, hacking and BSkyB, the BBC never properly explains the reasons why other media organisations – including the BBC – want to shaft a free-market competitor !!(and this basic dishonesty is spotted by the electorate; it’s one of the reasons real people are so apathetic about the Leveson business).

The non-Murdoch media have their guns trained on Murdoch, while the Beeb continues to destroy the business case of its private sector rivals with taxpayer-funded websites and electronic media of all kinds. None of this might matter, if we were not going through a crucial and difficult economic period. The broad history of the past 30 years in the UK is that the Thatcher government took us out of an economic death-spiral of Seventies complacency. Spending was tackled, the unions were contained, the City was unleashed, and a series of important supply-side reforms helped to deliver a long boom; and when the exhausted and fractious Tories were eventually chucked out in 1997, it was Labour that profited – politically – from those reforms.

The boom continued, in spite of everything Blair and Brown did to choke it. They over-regulated; they spent more than the country could afford; they massively expanded the public sector; they did nothing to reform health or education or the distortions of the welfare state. And so when the bust finally came, in 2008, this country was in no position to cope. We now have the twin problems of dealing with the debt, and recovering competitiveness – and neither of those is easy when the BBC is the chief mirror in which we view ourselves. If you are funded by the taxpayer, you are more likely to see the taxpayer as the solution to every economic ill.

If you are funded by the taxpayer, you are less likely to understand and sympathise with the difficulties of business; you are less likely to celebrate enterprise. I have sometimes wondered why BBC London never carries stories about dynamic start-ups or amazing London exports – and then concluded gloomily that it just not in the nature of that show. It’s not in their DNA. Fully 75 per cent of the London economy is private sector – and yet it is almost completely ignored by our state broadcaster.

Well, folks, we have a potential solution. In a short while we must appoint a new director-general, to succeed Mark Thompson. If we are really going ahead with Lords reform (why?), then the Lib Dems should allow the Government to appoint someone to run the BBC who is free-market, pro-business and understands the depths of the problems this country faces. We need someone who knows about the work ethic, and cutting costs. We need a Tory, and no mucking around. If we can’t change the Beeb, we can’t change the country.