George Clooney + other celebs raise $15 million for Obama at 'Starmegeddon' 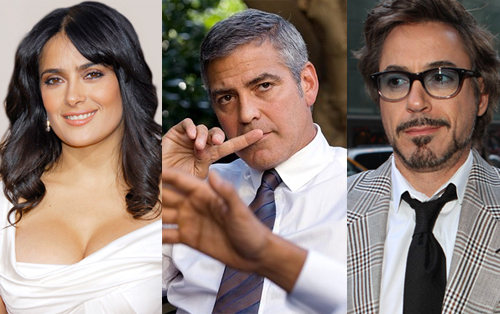 As he put the finishing touches to his dinner party preparations one could have forgiven George Clooney for being a little nervous. After all, it's not every day the president pops by for a bite to eat.

Fortunately for Mr Clooney he had 150 close friends, including Barbra Streisand, Robert Downey Jr, Tobey Maguire and Salma Hayek, on hand to keep the conversation flowing. And celebrity chef Wolfgang Puck, who does the catering for the Oscars, agreed to whip up some Peking-style roasted duckling for the guests.


The result was "Starmegeddon," the dinner party to end all dinner parties, as the elites of Washington and Hollywood came together to swell Barack Obama's re-election campaign coffers by a staggering $15 million, a new record for a presidential fundraising event.

Welcoming guests Mr Clooney joked about the superhero roles played by Downey Jr, Maguire and himself. He said: "We have Iron Man (Downey Jr), Spider-Man (Maguire) and Batman (Clooney) in the room. We should let the Secret Service take the night off.”

The setting chosen for this momentous confluence of politics and celebrity was Mr Clooney's multi-million dollar Mock Tudor home, which he bought 20 years ago from Fleetwood Mac singer Stevie Nicks, in a leafy hillside enclave of Los Angeles.

The great and good of Tinseltown, each of whom paid $40,000 for the privilege, arrived in a fleet of black limousines, Bentleys and Porsches.

Actress Reese Witherspoon's luxurious residence had been considered as a venue for Mr Obama's most high profile Hollywood love-in so far, but Mr Clooney's was considered a "better fit" by presidential aides.

In the driveway guests were greeted by a sign saying "Pot-bellied pig Crossing," which referred to the actor's late pet, Max. Once inside, they saw his private 3D cinema, and a pair of President John F Kennedy's ties, which he keeps on his wall.

Dinner was served on the star's private basketball court where 14 round tables, decorated with blue hydrangeas, were placed under a tent with a transparent roof lighted with hanging white paper lanterns.

The host himself sat with his girlfriend Stacy Kiebler on a table in the middle, his hands folded as if in prayer, while he was lauded for his largesse by the commander-in-chief. The presidential tribute, even by Hollywood standards, was gushing. 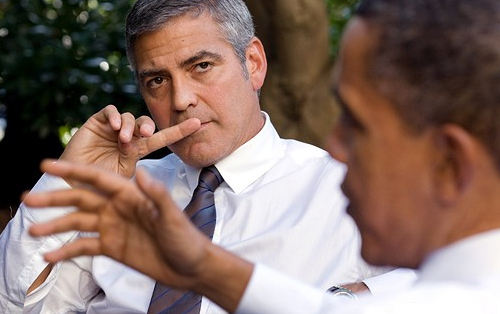 Mr Obama said: "I want to thank Clooney for letting us use his basketball court. We raised a lot of money because everybody loves George. They like me, they love him. And rightfully so. He seems to occupy a constant state of grace, and uses his extraordinary talents on behalf of something truly important."

The president joked that his famed "Hope" poster from the 2008 campaign was derived from a photograph of himself and Mr Clooney, and that it was "the first time George Clooney has ever been photo-shopped out of a picture."

He also talked about getting wrinkles and grey hair, adding: "George doesn't have to go through these things." Mr Clooney shouted "Look at me!" and the president replied: "I like that in you, brother." Mr Obama was also applauded as he spoke about his decision to endorse gay marriage earlier in the week. He said: "The truth is it was a logical extension of what America is supposed to be."

If he had been in any doubt how the move was received among his financial supporters in Hollywood, on his way to dinner his motorcade passed a sign on a mansion reading "Yay Gay."

The dinner raised $6 million from ticket sales. It broke previous presidential fundraising records because it brought in another $9 million from an online sweepstake offering two pairs of seats for "dinner with Barack and George," along with air fares. Entry was just $3.

Winners of the political equivalent of Willy Wonka's golden tickets were Beth Topinka, a science teacher from New Jersey, and Karen Blutcher, the mother of a five-year-old son with Down syndrome, both of whom brought their husbands as dates.

Mr Obama spent four hours, instead of his usual one for a fundraising event, chatting to stars and movie executives. He moved between tables telling some guests about his favourite TV shows, including ‘The Wire’.

His rapturous reception marked a resurgence of support after some influential figures in the entertainment industry had expressed disappointment over his first term handling of issues including Afghanistan and Guantanamo Bay.

Mr Obama spent the night at a hotel and then met up again with Mr Clooney and “Spider-Man” star Tobey Maguire in the morning to play basketball.

She said: "We want someone who will keep their nose to the grindstone, who will create jobs, rather than spend all this time trying to be BFF's with George Clooney."

But outside Mr Clooney's house neighbours, who had gathered to catch a glimpse of the president, had no such reservations.

Shelly Cohen, 63, was walking her King Charles Spaniel which is named "Clooney" after the actor. She said: "You never think you're going to have the president on your doorstep. It's absolutely thrilling. George Clooney is very popular around here."

Hopefully this puts an end to Robert Downey Jr is a Republican rumours.