The showrunner breaks down the action-packed penultimate episode and tells THR how she fought for the steamy scene between Fitz and Olivia. 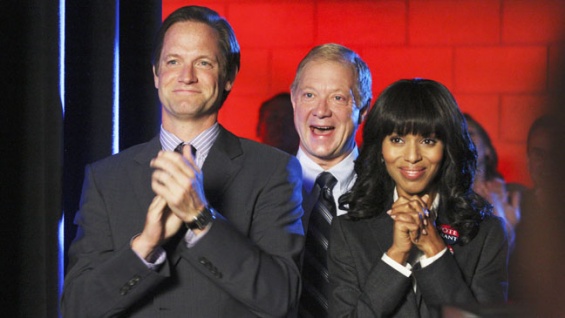 Fitz and Olivia's steamy backstory was finally revealed on Scandal, when the Shonda RhimesD.C.-set political fixer drama flashed back to the origins of the duo's first meeting on the campaign trail.

While the flashback provided key insight into why Olivia (Kerry Washington) was broad aboard -- to fix Fitz's (Tony Goldwyn) fumbling presidential campaign and spice up his marriage for voters -- it also provided insight to what Billy (Matt Letscher) and Mellie (Bellamy Young) would do for their respective candidates. Beyond that, Gideon (Brendan Hines) inched too close to cracking the whole case and was left clinging to life.

The Hollywood Reporter caught up with showrunner Rhimes to discuss all the big revelations and what viewers can expect during next week's season finale.

The Hollywood Reporter: Gideon figures out that it was Billy who set the president up with Amanda. Why would he do this now even though Sally (Kate Burton) told him when she first accepted the VP nomination to trust in God?
Shonda Rhimes: A lot of things happened between the time in which they accepted the nomination for vice president of the United States and where we are now in time. What you saw then was Sally saying to trust; the idea is that between then and now there's not a lot of trust to be had as far as he's concerned.

Billy brutally stabbed Gideon with a pair scissors -- is he dead? Could Quinn potentially help save him?

We leave poor Gideon there on the floor bleeding but we'll see what happens next week.

How will Gideon's stabbing impact Olivia and the team?

One of the things that we try to do with the show is that every episodes spins you off in a direction that you didn't know you were going: Amanda Tanner's kidnapping, the president showing up at Olivia's door, Gideon being stabbed. Every episode tries to spin you off in a new direction, not just to keep you on a hunt for no reason but to really focus us onto what's important. Gideon's stabbing is going to be a big deal and accelerate the need to find some closure on some things.

Is it safe to say that Billy sent Cyrus (Jeff Perry) the tape of Fitz and Olivia?

The president and Olivia realize that the tape that Cyrus received is their first night together. How are they going to work together to prevent that from coming out?

I don't know that they've decided that they are going to work together to prevent that from coming out. I don't think they came up with any answers in the episode that we've seen. In the next episode, things are going to take place that make it sort of imperative for them to deal with the situation. But I don't think that they've solved it or come up with a solution or fixed it at the end of this episode.

The flashbacks revealed Fitz and Mellie's dead marriage and the beginning of his relationship with Olivia. While it's still an affair, you still root for them as a couple even though he's the leader of the free world who's clearly cheating. How did you walk that fine line?

I wanted it to be a story that was not about people doing heroic things. I think that flawed people are sometimes heroes; heroes are always flawed people. So to me, it was about making that work. This relationship is, in sort of common society terms, the wrong thing. Yet, it's not the wrong thing. I love the very doomed quality to their love. He couldn't be with her and still the leader of the free world. I don't know any president who's gotten divorced while in office and remained president. The idea that he couldn't be with her and still remain the president makes for a very doomed, star-crossed kind of thing. Fitz also isn't all good; you're still rooting for them and yet you know he slept with Amanda Tanner. And he slept with Amanda Tanner simply because he's a guy who screwed another girl. He didn't do the right thing there, either. There is something to be said for the idea that Fitzgerald Grant might possibly just be a womanizer who happens to be in love with Olivia, or maybe not. But we've created a world in which you're rooting for this couple to figure out how to be together.

There's something about the way this episode laid out that felt perfect. We've been waiting for this moment and this episode is like a little movie of what's going on: how that relationship began, how it evolved and where it stands now. By the time you get to the end and she says, "Goodbye, Mr. President," you're heartbroken that they can't be together. We watch an entire romance evolve. The sex scene, I wrote it really, really specifically. The actors really went for it and tried to make it real. I had to take it by Broadcast Standards and Practices more times than I can count.

What was the issue?

There were shots that I had to pull out; they sent it to lawyers. It was crazy what went on with this scene. It's not a scene in which you watch two characters have sex; they never have sex, the scene ends when any sex could possibly begin. Yet there was something about it that was really steamy for broadcast standards and practices. They were so worried about it that we had to fight those battles.

What did you have to edit out?

Frames and shots; there were just little, tiny images that had to come out to make it not "too hot" for network television. In the end, I was still really pleased with it because I wasn't willing to compromise.

In the flashback, we learn how Pope & Associates was formed, that it stemmed from Olivia's work during Fitz's campaign and more backstory for Huck and Abby. Might we see more of where Stephen and Quinn came from?

You get small glimpses into Huck (Guillermo Diaz); you don't understand why she knows this homeless guy on the street. You've heard the backstory in Abby leaving her husband, now you're just seeing Abby leave. One of the things that we're excited about doing for Season 2 is to really delve into who these characters were. We will see what happens with Stephen. You've heard all this time that Quinn didn't exist before 2008. Who is Quinn? That's going to really start to resonate as we move on.

In the flashback, Mellie fakes having had a miscarriage to push Fitz's campaign over the edge. Is she really someone that Fitz can trust?

Oddly enough, I don't call their marriage a dead marriage; it's a very interesting political partnership that has served them very well. In the episode before this, Mellie said there isn't anybody in this building who wouldn't give their lives for you. It's this sense of Mellie is doing what needs to be done; she's taking care of it the way it needs to be taken care of. You need a heartbreaking moment in which conservative women around America are going to root for you and feel for you and this presidential candidate, Mellie's going to provide it. While it might make her a little bit morally bankrupt, she is just as much a politician as her husband. The idea that he gets to feel outrage about that is in a way laughable because we've seen him do worse. I think Melliell really is the power behind the "throne." She really cares about this campaign and about her husband in her own way.

David is hard at work on the case as well and pinpoints that Amanda's boyfriend works within the White House. Could we potentially see Olivia and David (Joshua Malina) team to try to crack this?

Yes. I feel like one of the best relationships on the show is the relationship between Olivia and David. While they're often on opposite sides, they always talk about wearing the white hat. They're both sort of wearing the white had here as much as they possibly can. So, yeah, I think that that's entirely possible that we could see them team up.

Heading into next week's finale, what can viewers expect? Will it be a cliffhanger? Will it all tie in?

I think a lot of it ties in, a lot of questions get answered. I liked the idea that whether we were doing seven episodes or 17 episodes that when we got to the end of this run there was going to be some definitive questions answered. The Amanda Tanner aspect of the story would be put to bed in some way for the audience. I didn't like the idea that we would leave that hanging. That said, there are other pieces of the puzzle that leap off into a new direction for the audience.

What did you think of all the big reveals? What are your theories? Hit the comments with your thoughts. Scandal airs Thursdays at 10 p.m. on ABC.