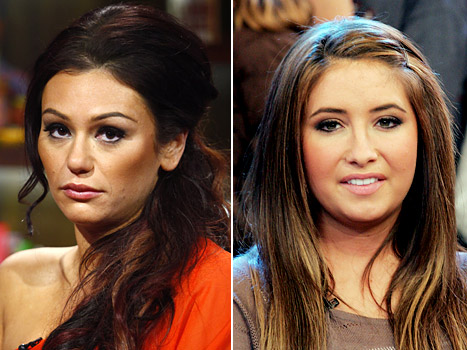 "Bristol should keep her uneducated, ignorant mouth shut. If you're living in the past you wouldn't have a kid without marriage. Hypocrite. It's 2012!" Farley wrote. "My best friend will get married one day and not just have civil union with his man. Stop hating people."

During his interview with ABC News' Robin Roberts, Obama explained how his daughters Malia, 13, and Sasha, 10, inspired him to think more seriously about the topic of same-sex marriage.

"Malia and Sasha, they have friends whose parents are same-sex couples," Obama said. "There have been times where Michelle and I have been sitting around the dinner table and we're talking about their friends and their parents and Malia and Sasha, it wouldn't dawn on them that somehow their friends' parents would be treated differently. It doesn't make sense to them, and frankly, that's the kind of thing that prompts a change in perspective."

In her blog post, Palin griped that Obama, 50, "made a massive change in a policy position that could affect the entire nation after consulting with his teenage daughters."

Palin argued that "in general, kids do better growing up in a mother/father home" and said that "in this case, it would've been helpful for him to explain to Malia and Sasha that while her friends parents are no doubt lovely people, that's not a reason to change thousands of years of thinking about marriage."

The single mom continued: "I guess we can be glad that Malia and Sasha aren't younger, or perhaps today's press conference might have been about appointing Dora the Explorer as Attorney General because of her success in stopping Swiper the Fox."

"Sometimes dads should lead their family in the right ways of thinking. In this case, it would've been nice if the President would've been an actual leader and helped shape their thoughts instead of merely reflecting what many teenagers think after one too many episodes of Glee."

i wouldn't watch glee for 5 minutes if you paid me a thousand dollars to do so.

i am tired. good night.

extremisttt
May 11th, 2012, 09:16 am
I still think it's delicious that Bristol got knocked up like the liberal "sluts" they condemn. DELISHUS.

sarshine
May 11th, 2012, 09:50 am
Good for her, more people should speak out publicly against this ignorance. Bristol Palin just needs to go back to Alaska and keep quiet. She's never contributed anything worthwhile.

I can't believe I'm agreeing with someone from Jersey Shore.

theskyyends
May 11th, 2012, 02:03 pm
i can't believe im agreeing with someone from the jersey shore. but seriously fuck bristol palin in this instance

This is for you, Bristol, with love from JWoww:

honestly, if that hasn't taught you that there is more than one way to live, or that the definitions of what makes a family have been substantially broadened beyond outdated 1950s stereotypes, then you are officially a lost cause, honey.

howlin_wolf_66
May 11th, 2012, 06:07 pm
It's a brave parent who isn't above learning things from their kids... I guess nobody gets taught anything in the Palin household.