check it out i'm rockin' steady ( 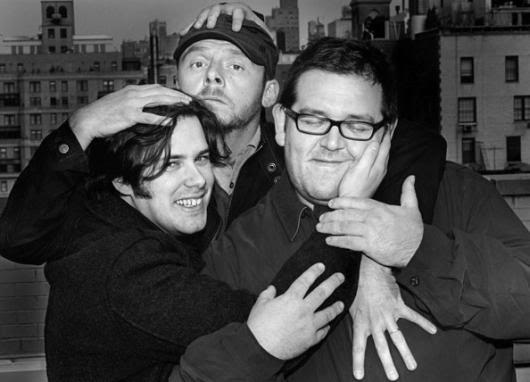 They fought off a zombie invasion in Shaun of the Dead and discovered a criminal conspiracy at the dark heart of a sleepy Gloucestershire village in Hot Fuzz. Now Edgar Wright, Simon Pegg and Nick Frost are to reunite for the third and final instalment in what will be a loose trilogy of films, The World's End. Perhaps unsurprisingly, the title refers to a pub.

According to Deadline, The World's End is due to begin production in September for a spring 2013 release. It will centre on five childhood friends who reunite 20 years after an epic pub crawl when one of them decides it's time they tried to repeat the feat. To complete the challenge, they simply have to reach the titular drinking establishment without ending up in the gutter; but wider forces are at work and it becomes clear that current events may have ramifications for the future of mankind itself.

As such, The World's End appears to continue an approach developed during Wright, Pegg and Frost's salad days on cult Channel 4 sitcom Spaced, where everyday occurrences such as trips to pubs and clubs generally took on epic import. Shaun of the Dead witnessed a lead character who is quite happy to deal with hordes of undead interlopers provided he can still get a pint at his local, while Hot Fuzz imagined The Archers as an explosive, hi-octane Kathryn Bigelow-style buddy cop action movie.

Pegg and Wright will write The World's End together, with the latter taking the director's seat. Since Hot Fuzz, both have been embraced by Hollywood, with Pegg appearing in Star Trek and Mission: Impossible films, and Wright directing the comic book adaptation Scott Pilgrim Vs the World as well as co-writing Steven Spielberg's recent Tintin film alongside Joe Cornish.

Wright and Pegg have long planned a successor film to Shaun of the Dead and Hot Fuzz in order to complete what is referred to whimsically as the "three flavours Cornetto trilogy", a reference to a running joke about Cornettos being the perfect hangover cure. The new project has been set up by Working Title at studio Universal. It has not yet been greenlit but should not struggle to find funding given the relatively low-budget nature of its predecessors, both of which made decent box office returns and have a cult following on both sides of the Atlantic.