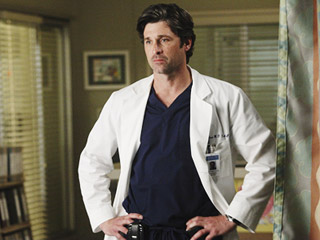 Story behind the cut, just because I don't know if this would be considered a ~spoiler~ for people who aren't going to meet their end in the season finale

Grey’s Anatomy favorites are poised to return next season.

EW has confirmed that stars Patrick Dempsey, Sandra Oh, Ellen Pompeo and Justin Chambers are close to successfully negotiating a return for the drama’s ninth season. Sources are staying mum on the terms, but Deadline reports they are each looking to stay for another two years.

The original stars on Grey’s aren’t the only ones looking to up their pay for coming years. The ensemble on Modern Family is also expected to seek substantial raises for working on the three-year-old series. Similar renegotiations are also in the works on Two and Half Men (where deals are up for Ashton Kutcher and Jon Cryer) but the MF talks have the potential to be the juiciest — depending on whether the adults band together à la Friends back in 2000.

It’s not expected to be nearly as dramatic over on 2.5 Men, where Kutcher has already hinted publicly that “I want to work with these guys.” The only question is how much over his current salary of $750,000 per week that CBS is willing to pay him.