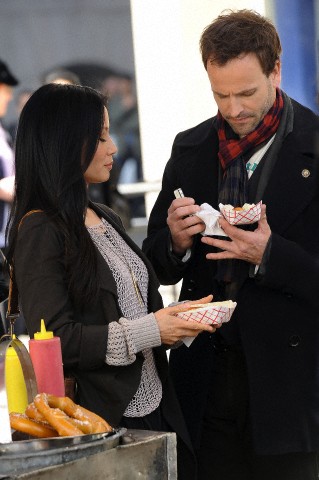 Elementary star Jonny Lee Miller says the US update of Sherlock Holmes, for which he recently filmed the pilot, has "enough differences" to Sherlock to make it worthwhile.

Asked about the similarities to the BBC show, Miller admitted "Yeah, obviously you look at it and say, “Wait a second ... " But I feel there’s enough differences there. I thought I could do something with it; otherwise, there’d be no point."

Miller and co-star Lucy Liu - who plays a female Doctor Watson to his Sherlock Holmes - have just finished shooting a pilot for Elementary.

"We’re still waiting to hear what happens with it. We’re not sure yet; we’re taking it slowly," Miller told Vulture. "But it was just a great project. And a good opportunity for me. So that’s the way you weigh those things."

When American network CBS first announced plans to do their own modern-day take on the great detective, Sherlock's executive producer Sue Vertue (wife of co-creator Steven Moffat) called the prospect of a similar show "worrying".

"[CBS] approached us a while back about remaking our show," she told The Independent. "At the time, they made great assurances about their integrity, so we have to assume that their modernised Sherlock Holmes doesn't resemble ours in any way, as that would be extremely worrying.

"We are very proud of our show and like any proud parent, will protect the interest and wellbeing of our offspring," she added.

Playing a similar character to Cumberbatch is not a first for Miller - he regularly swapped roles with his co-star in the National Theatre production of Frankestein last year, in which the two took turns to play both the creature and his creator.  The National Theatre Live production is set to be re-released in UK cinemas this June, and will be available in US theatres for the first time later in the year.

This show has so many haters. Is anybody out there actually looking forward to watching Elementary besides me? :-)