Either She's Trolling or... 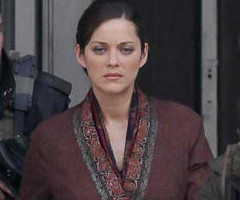 While it has long been known that Marion Cotillard is playing a character named Miranda Tate in The Dark Knight Rises, it is still heavily speculated to this day that she is actually playing Talia al Ghul, the vengeful daughter of Liam Neeson's Ra's Al Ghul (confirmed to have a cameo in this sequel).

While she still can't say much about her part in the story arc of this trilogy ending climax, Marion Cotillard has now gone on record, confirming that she is not playing Talia al Ghul.

"It was a very, very small role. [I play a business woman who] is fascinated by Wayne Enterprises. They go through difficulties, and she wants to help provide the world clean energies. She's a good guy."
Marion Cotillard then went onto note that she plays a good guy all the way through the film, never switching alliances. As evident by the latest trailer, Miranda Tate and Bruce Wayne will share an intimate moment or two. It is also possible that she is lying about not being Talia Al Ghul. Why else is she dressed in that short robe? It's surely not the attire of a business woman, now is it?

To read more from Marion Cotillard about her future projects: