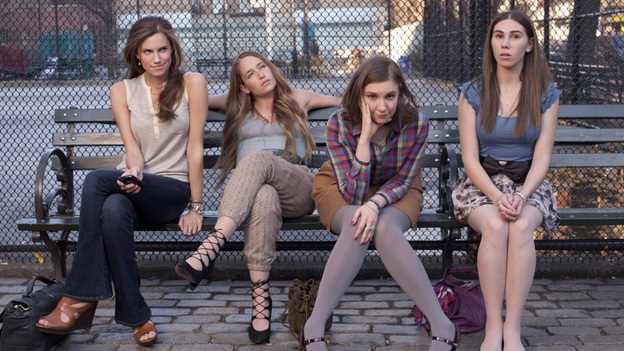 Lena Dunham was just 23 years old when her second feature film, Tiny Furniture, won the best narrative feature prize at the South by Southwest Film Festival. The movie's success led to Dunham striking a deal with HBO for a comedy series about a group of 20-something girls navigating New York City.

Girls, which Dunham writes and also stars in, premiered on HBO in April. Critics immediately heaped praise on the comedy for its voice and colorful storylines; The Hollywood Reporter's Tim Goodman called the show "one of the most original, spot-on, no-missed-steps series in recent memory." A New York Magazine cover story called the show revolutionary — and USA Today noted that "Dunham is clearly a talent to be reckoned with."

On Monday's Fresh Air, Dunham talks about creating the show, as well as her own experiences navigating life in New York City after graduating from college. She also addresses some of the criticisms lobbed at Girls, and details how she came up with the ideas for many of the scenes in the show. Interview highlights are below.

On the criticism Girls has received about a lack of diversity
"I take that criticism very seriously. ... This show isn't supposed to feel exclusionary. It's supposed to feel honest, and it's supposed to feel true to many aspects of my experience. But for me to ignore that criticism and not to take it in would really go against my beliefs and my education in so many things. And I think the liberal-arts student in me really wants to engage in a dialogue about it, but as I learn about engaging with the media, I realize it's not the same as sitting in a seminar talking things through at Oberlin. Every quote is sort of used and misused and placed and misplaced, and I really wanted to make sure I spoke sensitively to this issue. ...
"I wrote the first season primarily by myself, and I co-wrote a few episodes. But I am a half-Jew, half-WASP, and I wrote two Jews and two WASPs. Something I wanted to avoid was tokenism in casting. If I had one of the four girls, if, for example, she was African-American, I feel like — not that the experience of an African-American girl and a white girl are drastically different, but there has to be specificity to that experience [that] I wasn't able to speak to. I really wrote the show from a gut-level place, and each character was a piece of me or based on someone close to me. And only later did I realize that it was four white girls. As much as I can say it was an accident, it was only later as the criticism came out, I thought, 'I hear this and I want to respond to it.' And this is a hard issue to speak to because all I want to do is sound sensitive and not say anything that will horrify anyone or make them feel more isolated, but I did write something that was super-specific to my experience, and I always want to avoid rendering an experience I can't speak to accurately."

On 20-somethings who still live with their parents
"I am a working woman out in the world, but I still live with my parents half the time. I've been taking this long, stuttering period of moving out. ... I feel like I'm constantly asking them to please stay out of my work life, but also to please bring me soup. It's this weird moment where you just don't have a sense of what age-appropriate behavior is because there is no age-appropriate behavior."

On her relationship with her parents
"When I graduated [from] college, my parents said, 'You can live with us,' but they made it really clear they were not going to support any of my endeavors. They were like, 'You can live with us and that's a great gift we can give you, but you have to have a job, you have to figure out, like we did, how to have a creative life, and we're giving you a great step ahead by already living in the city you want to be in, but we're not going to serve that function for you. Our parents didn't do it for us, and we don't think it's healthy.' "

On chick lit and romantic comedies
"I think romantic comedy, when done right, is my favorite genre. It's just a genre that's very human. Bridesmaids had a pink poster, and I loved it — and I don't want to call out any movie specifically, but there is a certain kind of film that is not fun to me in a guilty-pleasure way, and there is a certain kind of chick-lit book that isn't even fun to me in a guilty-pleasure way, because I don't see any of myself in it. Because none of my actions — and maybe this is speaking to my age, because I'm 25 — but none of my actions have ever been [determined] by the search for a husband, or wondering if I was going to have a family someday, or wanting to live in a really great house, or thinking it would be really great to have a diamond. There are just certain drives, and I think that those things may be representative of a desire for love or something else. I'm sure those writers would not appreciate me distilling their thesis down to the search for a diamond, but there's a kind of female character that doesn't make sense to me."

On guys she dates later coming out as gay
"It's happened to me more than once, and my mom says it must be genetic because she has a couple of them in her past, too. Our hope is that what it means is that we are a comfortable resting place for a guy who is figuring things out. Our fear is that we turn men gay."

On tattoos
"When I started getting tattoos, it was before I had any sexual relationship to anybody, so it was really about my relationship with myself. I kind of like that they come from that spot. They were never sensually motivated, they were personally motivated. So now I think about it more like, people who I am naked near are seeing these artifacts of who I once was, and maybe getting a clearer sense of who I am. There is something vulnerable about showing your tattoos to people, even while it gives you a feeling that you are wearing a sleeve when you are naked."