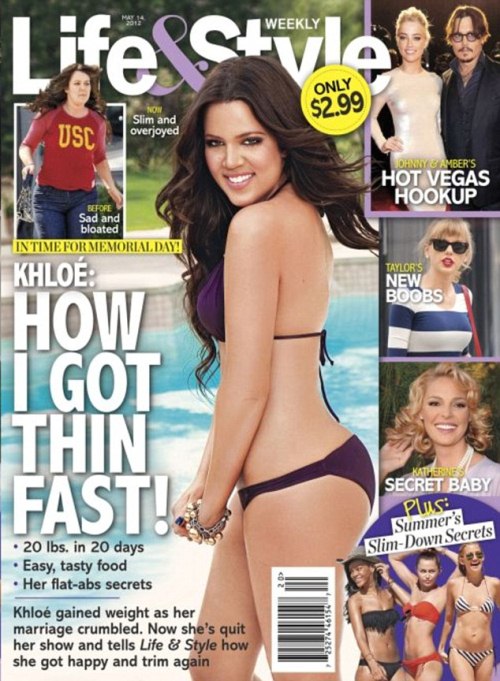 Khloe has been hitting the gym with her hubby & dropped 20 lbs. in the process! Keep reading to find out how she lost the weight. Khloe Kardashian is determined to help husband Lamar Odom get back in the NBA! In addition to being his cheerleader, the 27-year-old reality starlet has also become his workout buddy.
“My husband is working out four to six hours a day right now, so I work out with him,” Khloe tells Life & Style. “We’ll do outside workouts and inside workouts. We’re always switching it up, so it’s fun.”
Khloe may have started exercising to support her husband’s career, but the brunette beauty has also been reaping the benefits. Nutritional expert Elena Michaels estimates Khloe has already lost 20 lbs. in 20 days! “She looks like she’s now 155 pounds,” Elana says. “You can see it in her cheekbones and jawline, and her legs are much slimmer.”
As we reported earlier, Khloe has openly struggled with her weight and body image for years, and mom Kris Jenner has only made her feel more insecure.
“She’ll say, ‘Oh, you’re a little too fat right now,’” Khloe revealed.

While Khloe may not agree with her mom’s tough-love approach, she admits she has an unhealthy relationship with food.
“I’m just an emotional eater,” she confessed. “Whenever I go through something, I gain weight.”
Now that Khloe is back in LA and things are looking up with Lamar’s career (he’s currently training for the Summer Olympics), the brunette bombshell is swapping Dallas comfort food for sensible salads.
“She eats mostly fresh fruits and vegetables, with small amounts of lean proteins like fish and chicken,” says Robbie Davis, who’s been training both Khloe and Lamar. ”She trains like an athlete when she’s with us, even doing weight training. We also run the canyons surrounding their house. Plus she does pilates and stair-running on her own.”
Khloe’s body isn’t the only thing on the upswing. Since pulling the plug on filming another season of Khloe & Lamar, the couple’s relationship has also improved.
“They are just so happy,” Kris beamed.
What do YOU think of Khloe’s new rockin’ body?
(source)
Déjà vu.... (edited for clarity: this cover below is from July 2009) 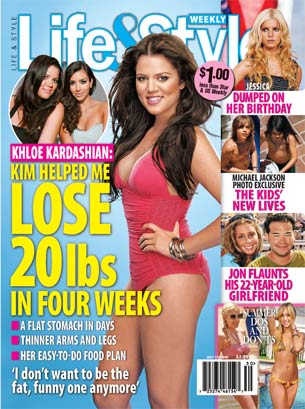