Game of Thrones vs Girls: “Modern” vs Fantasy Women 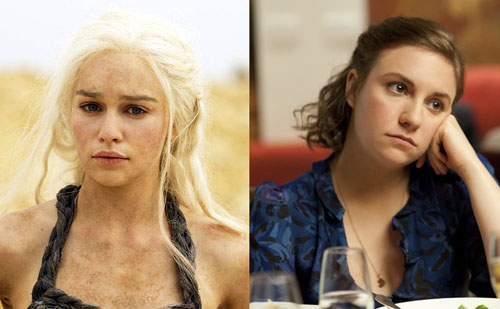 It’s no surprise that fans have been tweeting, blogging, and Facebooking up and down about the representation of women in Game of Thrones. Since it’s first episode debut, George R. R. Martin’s epic fantasy saga has presented its fans with a heavily misogynistic world populated by powerful men and the women trapped in their machinations. Yet for all the plethora of words tossed out there about the gender politics within Game of Thrones, this article is about something very different. I’m talking about the divergence of gender representation in fantasy versus “real world” television for today. For an example of modern “realistic” television, I’m looking at HBO’s new NYC comedy, Girls.

Girls is marketed as the love child of Sex in the City and every “come to New York to live your dream” story for the lost millennial. This satire is the brainchild of Lena Dunham and has equally been called “groundbreaking” and “unwatchable.” It chronicles the fumbling adventures of four “typical” women trying to make their way in the hipster-infested world of New York’s twenty-something set.

Let’s forget for a second that for a satire, the show is decidedly not funny. After a disturbingly bland first episode, I was struck by the unbearable ennui and apathy of the main characters. The women are hopeless stereotypes of First World Problems given form, racially bland, and focused on their own self-importance. And as a representation of women, Girls rings of a kind of terrifyingly banal view of women that is boggling. In just the first episode, the female characters dance the modern dance of frighteningly empty sex, drug use, and how to beg your family for financial support when you’re a hopelessly unmotivated creative in NYC. Frighteningly, plenty of folks are responding to Dunham’s “comedy,” with the debut being called “bold” and “fresh” by some reviewers and pulling over 800,000 viewers for it’s first episode.

Now, I watched the first episode, purely after hearing another friend complaining about it. And while I watched, mouth gaped wide in horror, one thought crossed my mind — if this is the stereotype offered of today’s modern woman, I’d rather be in Westeros.

The juxtaposition of Game of Thrones versus Girls might not be entirely fair. Where Dunham’s limpingly unfunny portrayal of women in Girls is meant to be satirical, Game of Thrones is not. Yet both are supposed to be heavily character-driven shows and have the common feature of portraying beautiful, mostly upper-class, mostly white women. Sitting through the first episode of Girls, however, I was struck by the notion that I’m more inclined to root for women who are oppressed by their circumstance as opposed to themselves. Where the world of Westeros is hopelessly misogynistic, it represents a contextual gender inequality that still inspires more powerful women characters with whom to empathize, rather than these modern Girls in a post-feminist American comfort. And it boggles me why, as a woman, I would want to watch the graceless foibles of the “women” of Girls  when I could find powerful women characters to watch in another HBO time slot.

The handling of sexuality and female sexual power, for example, comes off as utterly graceless in Girls as opposed to Game of Thrones, which is startling to me considering GoT is the one that goes out of its way to show the debasement of women. In season one of Game of Thrones, Daenerys Targaryan is basically sold to Khal Drogo for an army by her own brother and made to have sex with him on their consummation night. Yet that questionably consensual scene had none of the eye-covering, squirm-inducing awkwardness of the sex scene in the first episode of Girls, where Hannah basically lets herself get used by the “good guy” she’s interested in like a piece of meat. Hannah is not a slave, yet she tosses away dignity that characters like Daenerys or incest-prone Cersei Lannister carry with every instant on screen. And yet people question Martin’s work as misogynistic while Girls, written by a woman, is touted as “fresh.” Everyone’s okay with this?

This isn’t the first time this issue has come to mind. When a lot of my friends in college were enamored with Sex in the City, I was struck by a lack of ability to empathize with the over-hyped adventures of the rich and neurotic. So is it a question of naturally differing taste? Maybe. But there are also modern shows that attempt to portray tough, modern women with debatable success — I’d look to shows like Castle, NCIS, and The Good Wife as examples. Comparing the portrayal of women on Girls versus Game of Thrones brings me to the core issue of what bothers me about the portrayal of a lot of modern women. While women in fantasy novels strive against big issues that are both external and internal, a lot of “modern realistic” women characters seem to be hopelessly trapped in their own self-doubting neurosis. These are women shown to be selling themselves chronically, unbearably short and we, as women, are supposed to see this as a reflection of the modern woman’s woes. Maybe I was mistaken, but I believed our fiction was not only supposed to reflect the modern world but also provide us with figures to understand and figures that inspire. For a fantasy fan like me, these modern portrayals of women often do neither. They usually just make me cringe.

Fantasy literature as well as film and television have grown over the years to a place where women can stand as their own heroes. Even when they live in worlds with built-in gender issues, they often shine as passionate, powerful embodiments of feminine archetypes, from mothers to female warriors, killers to presidents. Game of Thrones is the inheritor of that legacy and, question though we might the in-world gender issues, Martin has provided us a world where his female characters have depth, passion and vitality. The women of Westeros might worry about whether their gowns look all right, but they are movers and shakers with better things to do than spend entire episodes neurotically analyzing their man problems. GoT’s intense power as a show brings home that in fantasy, we seem to find more authentic women these days than in the realistic fiction, and that disturbs me.

If the white-washed, hopelessly vapid women of shows like Girls are meant to be recognizable as representative of modern issues, then I’ll pass, thanks. I’ll stick to my Starks and my Targaryans. Fantasy has provided the women of strength and dignity that give me something to care for and aspire to. And I’ll take that over “the voice of my generation” any day of the week.

(Oh and yes, I agree with Best Week Ever - Girls should have had velociraptors. Then maybe it would have been watchable.)