Kerry Washington on Scandal's Dark Twist: I Was Like, 'Ohh, That's the Kind of Show We're Doing!' 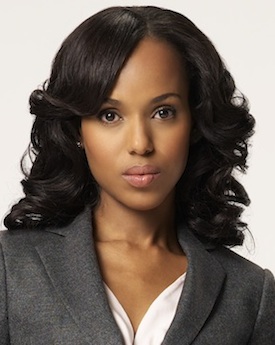 Talk about a crisis to manage.

ABC’s Scandal (Thursdays, 10/9c) started as what seemed to be a somewhat rote yet juicy Shonda Rhimes drama about a fixer and her elite team of helpers. Sure, it had the element of a White House aide alleging an affair with the president, but that read like an easy-access riff on the Lewinsky scandal, just the sort of noisy wrinkle to lure lookie-loos to a new series.

Amanda Tanner, however, ended up with bigger problems than a stained dress.

In the wake of the dark turn that capped last week’s episode of the ABC freshman, TVLine hopped on the phone with series front woman Kerry Washington — on the eve of her visit to the White House Correspondents Dinner, natch — to talk about the truly scandalous saga ahead, how the Tanner case will affect Olivia Pope’s “bond” with POTUS and the rather polarizing nature of that very romance.


TVLINE | Would you agree that with last week’s episode and the Amanda Tanner abduction, the show hit a turning point?

I think so. It’s funny, I was talking with Katie Lowes (who plays Quinn) the other night and we were remembering that’s how we felt when we read it – like, “Ohhh… that’s the kind of show we’re doing.” [Laughs] Week after week we’d get a script and go, “Oh… my… goodness. This is unbelievable.” And the next week we’d go, “Last week was nothing – this is unbelievable.” The stakes keep getting higher and higher.

TVLINE | That’s what I’ve been telling people, that this is where the show – and I mean this in the most complimentary way – starts getting a bit bananas. This is where the storyline really deviates from the whole Monica Lewinsky thing.

Right, right…. Which I think is great because this is not a ripped-from-the-headlines show. It’s rooted in the experience and realities and culture of crisis management, but it’s not any one story from Judy Smith [the real-life fixer who inspired Scandal]. 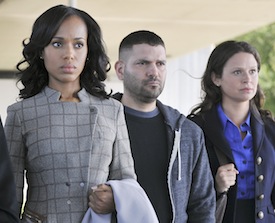 TVLINE | Did Shonda map out for you, the series lead, where the show would be going?

Nooooo! Not at all! Not at all. In fact, at some points it got really sort of difficult for somebody like Tony [Goldwyn], who would say to her, “Well, how does [Fitz] feel? What is actually going on?” Sometimes we would get information out of Shonda, other times she would just shrug her shoulders, and sometimes she would tell different actors different things. [Laughs] Once, Liza [Weil, who plays Amanda] and I were each being whispered to by Shonda, and in a very Scandal-the-TV-show kind of way, we sat down and said to each other, “OK, let’s put it out on the table. What do you know?”And we shared.

TVLINE | The new promos feature Olivia, fearing the worst, saying to Fitz, “Murder is murder.” As you played it, do you feel she really believes that he or his team is behind what happened?

I think a key part of that conversation comes later on, when she makes a reference to how “if you take a dog [meaning Cyrus] off its leash, it’s still your fault.” I’m not sure in that moment that she’s wrapped her head around the idea that Fitz himself could have done that, but I think she knows him well enough to know that sometimes he becomes part of a machine that’s operating for his success — because she’s been a part of that machine.

TVLINE | One thing I enjoyed about this next episode is how the abduction sets the table for us to learn more about Huck (played by Guillermo Diaz). (Yes! He's been underused so far.)

Isn’t that the best? Part of what’s so fun about the way this season is structured is we learn about Olivia’s skeletons at the end of the pilot, and you go, “Holy crap. This person is not who I thought they were.” She’s crying in a coat closet, she had an inappropriate relationship with the president… But as the season goes on, you realize you can make that statement for every single person that works at Pope & Associates. [Last week we learned about] Darby being in an abusive marriage, and the deep sisterhood between these two women…. And we get more about Huck in this one. 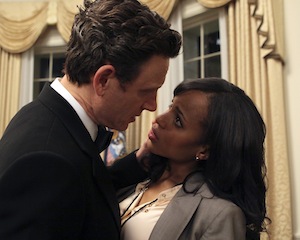 TVLINE | Do you think that the season’s penultimate episode (airing May 10), which is told mostly in flashback and reveals the origin of Olivia and Fitz’s affair, might convert any out there who are still on the fence about that relationship?

It’s interesting to put it that way. Lyn Paolo, our brilliant costume designer with whom I basically share a brain, always got the script first, because she needed more prep time, and one day she came into the hair-and-makeup trailer and said, “I read [Episode] 6″ — and all of the behavior in the trailer stopped. Like, “What’s in it?!” She said, “I can’t tell you too much, but I will say there is a line where Fitz says to Olivia, ‘[SPOILER].’” And when I tell you that all mayhem broke out in the trailer…. Half of us were so excited [by it], and the other half, well, my stylist literally threw her brush across the trailer…. Like, with total disgust. (Omg!)


TVLINE | Well, the show kind of wants us to root for Olivia and Fitz, but in doing so you’re basically condoning extramarital affairs. So we kind of need this piece of information from years ago to know what were the circumstances — not that anyone is ever pardoned, no pun intended, from such behavior.

It’s really fun to be around these divergent feelings about Olivia and Fitz. I would say that about half of the people who were really, really against the relationship moved [after watching Episode 6], but the other half is like, “I don’t care how it started, no good can come from this.” They maybe had a little bit more compassion, but…. [Laughs]

Sorry mods, I forgot to add the source in the first one.