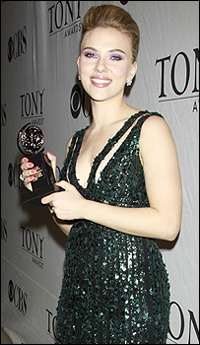 Tony Award winner Scarlett Johansson is close to finalizing a deal to return to Broadway in a revival of Tennessee Williams' Cat on a Hot Tin Roof, according to Variety.

In April, "Avengers" star and Academy Award-nominated "Hurt Locker" actor Jeremy Renner revealed that he was considering starring as Brick in a Broadway run of Cat on a Hot Tin Roof along with Johansson as Maggie.

"I'm close to making a deal on it and I cannot wait absolutely to get to it. I'm exhilarated, I'm terrified, but I think in a good way," Johansson told Variety.

No official announcement of the production has been made.

Johansson was last seen on Broadway in a revival of Arthur Miller's A View From the Bridge.

Cat on a Hot Tin Roof was previously revived in 2008 with an all-African American cast led by Terrence Howard and Anika Noni Rose. A 2003 revival starred Jason Patric and Ashley Judd.

I would watch the FUCK out of this, tbh.