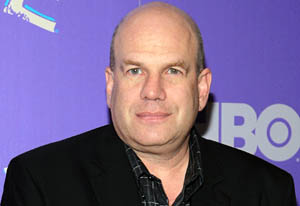 Creator David Simon is apologizing for calling fans who discovered The Wire after its HBO run "wearying."

While discussing former colleague Richard Price, the creator of CBS' new drama NYC-22, in an interview with The New York Times, Simon was posed with the notion that many of the diehard fans of The Wire weren't actually watching the series in earlier seasons, but had rather jumped on the bandwagon late. "I do have a certain amused contempt for the number of people who walk sideways into the thing and act like they were there all along," Simon said, adding that the new fandom is "wearying" "because no one was there in the beginning, or the middle, or even at the end. Our numbers continued to decline from Season 2 on.

"It doesn't mean anything until there's a beginning, middle and an end," he continued. "If you want television to be a serious storytelling medium, you're up against a lot of human dynamic that is arrayed against you. Not the least of which are people who arrived to The Wire late, planted their feet, and want to explain to everybody why it's so cool. Glad to hear it. But you weren't paying attention. You got led there at the end and generally speaking, you're asserting for the wrong things."

But Simon quickly clarified his comments on Friday, telling Hitfix.com that he was speaking specifically about fans who now pick apart the series in stories that feature March Madness-style brackets and break down characters and episodes.

He also apologized for insinuating that fans who didn't get to The Wire early are not true fans. "My apologies to anyone for saying, or trying to say, 'You're not cool if you didn't get to The Wire early, and I only want you to watch the show on my terms.' What I was saying is The Wire has been off the air for [four] years now. That it would be celebrated with things like, Who's cooler? Omar or Stringer, at this late date, and that the ideas of the show would be given short shrift, those were the target of my comments."

What do you think about Simon's comments?