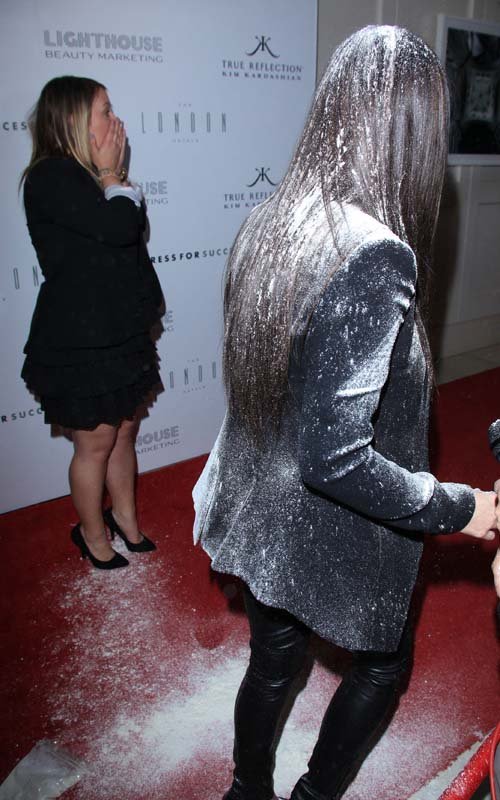 What's worse: Being Ryan Seacrest and having fake ashes spilled on you at the Oscars or being Kim Kardashian and having someone flour-bomb you on the red carpet during an event?

The reality star was doing interviews at a launch party held at the London Hotel in West Hollywood for her new fragrance True Reflection tonight, when—out of nowhere—a younger female fan (we guess you could call her that) threw an entire bag of flour on Kim.

"That probably is the craziest, unexpected, weird thing that ever happened to me," Kim told us. "Like I said to my makeup artist, I wanted more powder and that's a whole lot of translucent powder right there," she said, laughing off the entire ordeal.

Kris Jenner commented on the "festive" event, telling us, "If anybody comes at me with something, call security."

The mystery woman tried to run away, but Kardashian's rep held her and security escorted her away. And like a lady, Kim walked away calmly, got cleaned up and returned back to the carpet about 10 minutes later.

There's no exact reasoning as to why this woman did what she did, but some media members said they heard her saying something about fur (uh-oh).

Regardless, everyone was cheering and applauding our Kimmy once she returned. What a good sport!

bellwetherr
March 23rd, 2012, 11:57 pm
You know that the Manzos had actual ties with the mob right? Her father-in-law was murdered in a very typical mafia fashion.
(no subject) - 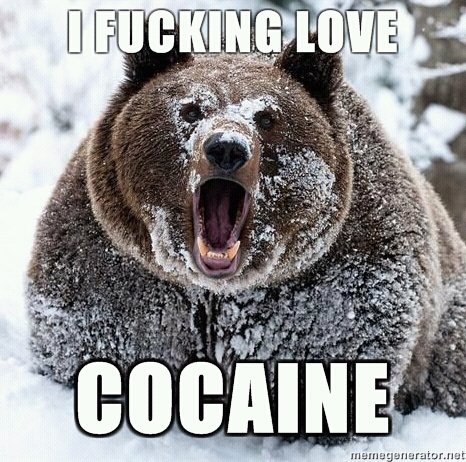 or here's a better vid http://www.eonline.com/videos/kim-kardashian-flour-bombed-at-event/180909

wishesgranted
March 23rd, 2012, 10:31 am
I find the entire K clan incredibly annoying but the flour bombing is just ridiculous and stupid. Good on Kim for being a good sport about it.

beatlesluv
March 23rd, 2012, 02:15 pm
MTE. I find it incredibly rude and unnecessary, no matter who it is (unless it's Chris Brown or something, then go ahead).

gjpancake
March 23rd, 2012, 05:42 am
yeah, I think it was mentioned in another website that they heard that the girl was rambling about fur, idk

blacklicorice99
March 23rd, 2012, 05:23 am
She looks like she just witnessed a homicide, not someone throwing a cake ingredient on a reality star
(no subject) - (Anonymous) Expand
(no subject) -

allons_y42
March 23rd, 2012, 05:26 am
lol exactly! It's just flour, kiddo. Nobody died, unless you waana mourn the potential cupcakes that gave their lives
(no subject) -

ashe_frost
March 23rd, 2012, 05:38 am
IDK, I just think she looks surprised. Then again maybe I just over react at shit because I'm always like dropping my keys and doing that cartoony "OH GOD SOMEONE HELP ME" gasp.
(no subject) -