Clothing and home furnishing retailer Urban Outfitters has come under fire from lesbian, gay, bisexual and transgender (LGBT) advocates after reportedly selling a greeting card some have deemed transphobic.

As Towleroad reports, the card, a play on the "Jack and Jill" nursery rhyme, is currently listed as "sold out" on the official Urban Outfitters website. But a screenshot of the alleged card is currently visible on Reddit.com, and has since been picked up by LGBT blogs Queerty and Unicorn Booty in addition to Towleroad. 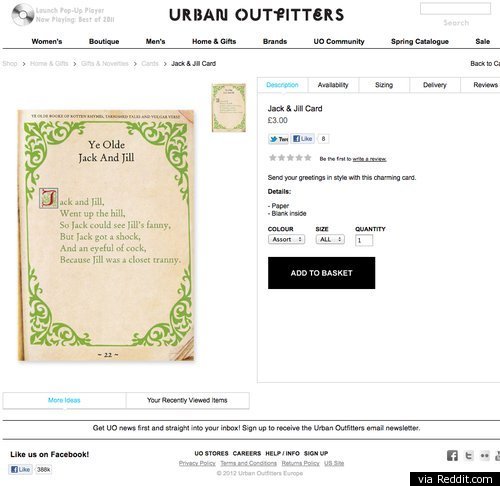 HuffPost Gay Voices has reached out to Urban Outfitters' Media Relations department for comment, and is awaiting reply at the time of this writing.

Aimed primarily at "young city hipsters," Urban Outfitters is the parent company of several brands, including Anthropologie, Free People, BHLDN, and Terrain, according to Forbes.

In 2008, This is Money UK reported that Richard Hayne, company co-founder and former CEO, had "views on homosexuality are both bizarre and old-fashioned," and noted that "buying his clothes is like giving cash to George Bush."

According to Bloomberg Businessweek, Hayne was replaced by Ted Marlow, former president of the Canada-based Indigo Books & Music Inc., as the company's CEO last month.

Does there exist a minority group that UO hasn't managed to offend yet?