For the 5 people who don't know them yet - One Direction: A Guide To The Biggest Boy Band Around

After thousands turned out to see the British group perform on 'Today,' we look at who they are and how they got so big so fast. 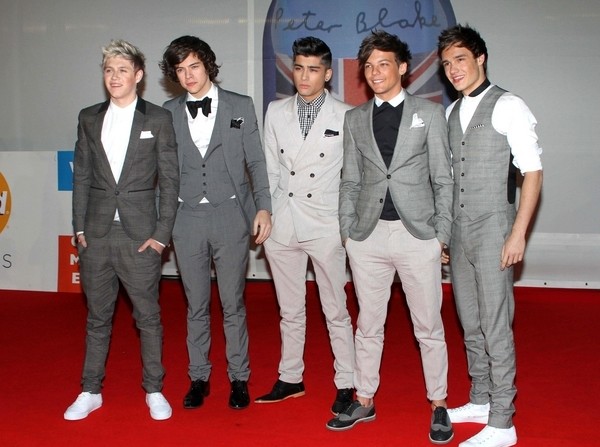 On Monday morning (March 12), One Direction made their American television debut on "Today," performing their hits "What Makes You Beautiful," "One Thing" and "More Than This" in front of what was, according to Matt Lauer, one of the biggest crowds ever to pack the plaza — right up there with the numbers attracted by top pop acts like Lady Gaga and Justin Bieber.
If the throngs of screaming teenage girls left you scratching your head, wondering what all the fuss was about, it's not your fault. These guys seem to have come out of nowhere and already have people asking, "Are One Direction the next Beatles?"

Why is everyone suddenly talking about One Direction? Let's take a look.

What is One Direction?

We're glad you asked. One Direction is a five-member boy band. They are already very popular in their native U.K. (hence the Beatles comparison), where their debut album, Up All Night, has already gone double platinum. Night is being released in the U.S. on Tuesday.

Though the lead single from Night, "What Makes You Beautiful," has only recently been added to U.S. radio, it is already a hit, with sales of 255,000 in just three weeks, according to Nielsen SoundScan. The song debuted on the Billboard Hot 100 at #28 in late February, giving the boys the highest debut chart position of any U.K. act since the Spice Girls' "Wannabe" opened at #11 in January 1997.

"Beautiful," a carefree pop ditty with an infectious chorus, bested Adele's "Rolling in the Deep" to take home the fan-voted Best British Single prize at the Brit Awards last month.

The fan frenzy around One Direction is reminiscent of the early days of Bieber Fever. When the band made its first public appearance in the U.S. at Boston's Natick Mall on March 4, more than 5,000 screaming fans descended on the shopping center. It was a relatively peaceful scene, though, especially when compared to the riot that broke out in 2009 when the 3,000 fans who had gathered at Long Island's Roosevelt Field Mall to see Bieber began pushing and shoving as they got word that police were canceling the event because the crowd had become too rowdy.

A likely reason the band already has such a large and fervent fanbase here in the U.S. is their accessibility on YouTube, where the video for "What Makes You Beautiful" has nearly 69 million views. YouTube is also largely credited with launching Bieber.

Who is in the band?

The five English and Irish gents in One Direction are Niall Horan, 18, Zayn Malik, 19, Liam Payne, 18, Harry Styles, 18, and Louis Tomlinson, 20. In typical boy-band fashion, each guy has his own shtick. This morning on "Today," we learned that Horan is the "cute little Irish one," Malik is the "quiet and mysterious" one, Payne is "the sensible one," Styles is "the charming one" and Tomlinson is "the funny one."

Each group member appeared on the 2010 season of the U.K. version of "The X Factor," where they tried and failed to make the cut in the individual boys category. At the suggestion of the show's producers, they joined forces and re-entered as a group. Together as One Direction, they ultimately finished third in the competition and were signed to "X Factor" creator Simon Cowell's Syco Records.

The sky's the limit.

One Direction recently wrapped up a small joint tour with another boy band, Big Time Rush, and its success inspired Entertainment Weekly to run a story with a headline asking, "Are Boy Bands Officially Back?"

Considering the success of The Wanted, who just wrapped their tour of the U.S. and U.K. at Dublin's massive O2 Arena on Friday and will release their U.S. debut on April 24, it's a question many are now asking. It's been a long time since the Backstreet Boys, 'NSYNC and 98 Degrees ruled pop radio, and the out-of-nowhere success of the Wanted and One Direction have a lot of people wondering whether, after several years of hip-hop stars and pop divas ruling the charts, we're in for a boy-band revival.

One Direction are already booked to perform at the Nickelodeon Kids' Choice Awards on March 31 as well as on "Saturday Night Live" on April 7. The band's December-January Up All Night tour of the U.K. sold out in minutes, prompting the band to add an Oceania leg with five dates planned across Australia and New Zealand in April. The next logical step would be a tour of the U.S., though no plans have been announced.