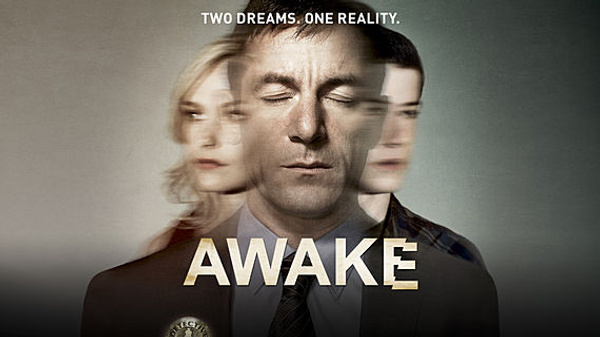 After a promising pilot episode, NBC’s “Awake” didn’t disappoint as Charlie’s two worlds continued to connect in a clever and innovative manner.

Last week we found out that everything in Michael Britten’s life was completely warped after a fatal accident, but in a very unexpected way. Essentially he is living a double life. In one world he is living with his wife, Hannah, grieving over the loss of their son, Rex. But when Charlie goes to bed at night he awakes to a completely different life, where his wife died in the accident and Rex survived.

But despite seeking a therapist’s help in both worlds, Michael (who works as a police detective) still cannot determine what’s real and what’s a dream…and he has no intention of figuring it out and living without his son or wife. So he wears different colored bands on his wrists to avoid confusion: red band when he’s with his wife, green when he’s with his son.

Last night’s episode started off in the green world, where Michael was investigating the murder of a diabetic fertility doctor, Benjamin Mackenzie. Initially his death was ruled a heart attack but upon further investigation it was discovered that someone had planted a deadly chemical in his insulin.

Meanwhile in the red world Michael notices Mackenzie’s name again, except this time in this alternate world Mackenzie was a homeless junkie who had been murdered. And even though the case seems to be a dead end, Michael forces Vega to question potential witnesses around town for the entire day.

They finally find a witness who’s a little off his rocker and tells them that a “little guy” killed Mackenzie.

So when in the green world, a suspect is brought in for questioning and he is almost seven feet tall, Michael is skeptic. The suspect claimed to have been watching TV when Mackenzie was murdered but had no one to back up his alibi. He had an altercation with Mackenzie two days before the murder and had even threatened to kill him. But Michael still was not convinced and manages to prove his innocence.

So he finds out that Mackenzie’s computer had been hacked and it is traced back to a seventeen year old, Sam Harvinson. Sam tells Michael and his partner that he had simply been searching for his own records to find more information about his father who had died shortly after he was born.

Michael’s partner, Bird, can’t understand why height is such an issue in this case and Charlie is having trouble explaining why. And in the red world his other partner, Vega is furious that they are following a case that seems so unimportant.  But Michael actually manages to solve the murder in the red world (it actually was Sam), but in the green world, the case remains unsolved and he is told to give it up.

Back in the red world, Michael discovers that Rex had been getting mail sent to his friend’s house. A reluctant Hannah decides to open the mail while Michael is at work. She discovers that every time Rex had said he was going to the “beach,” he was actually building at motorcycle with his friend, Cole. So she tells Cole that he should finish the bike because Rex would have wanted him to. She tells Michael that she actually felt proud and that it was nice not to feel devastated at the thought of him for once.

And in the green world, when Rex tells Michael he’s heading to the “beach” he tells Rex to wear a helmet. Rex shows Michael his bike and father and son finally share a bonding moment after having struggled to connect with one another since the accident.

As if that weren’t mind blowing enough, the last few minutes of the episode opens up a whole new can of worms. Back in the red world, Michael’s boss is visited by a mysterious man to discuss Michael and implies that the car crash was actually a plan to take out his whole family.

And so the audience is left questioning whether the accident was really an accident at all.

source
I really just want to talk about this show. I have loved the first two episodes! I really like the premise and the connections between the two cases keeps me interested (although I'm curious to see whether eventually they will do more in-depth investigations since the ones these episodes have been pretty quick and brief).