Armie Hammer Says 'The Lone Ranger' Is An "Adventure Film" & "Buddy Comedy" But Sorry, No Werewolves 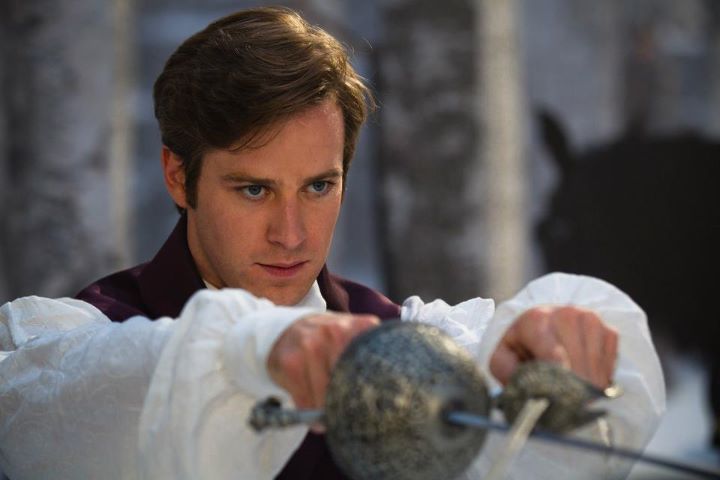 Armie Hammer has just finished his first week on "The Lone Ranger" -- in which he's playing the title role. After portraying the Winklevoss twins in "The Social Network," Leonardo DiCaprio's lover in "J. Edgar," and now a Prince Charming of sorts in a Snow White film, Hammer said he's now having the time of his life playing the legendary masked man -- a role which he calls "incredible."

"I feel like a little kid playing cowboy, like when I was six years old," Hammer told The Playlist while doing press rounds for "Mirror Mirror." "If the next seven months are like this first week, I'm the luckiest actor in the entire world."

Hammer has "Mirror Mirror" to thank for the cowboy skills he's utilizing in "The Lone Ranger" -- since he spent months learning how to ride a horse for the former film, and used the same horse trainer on both projects. "In fact, we're even using the same horses," he said.

Even though he's playing the lead role in a major tentpole project, Hammer said he doesn't feel that it's all on him to carry the film, given who's playing opposite him as Tonto. "Let's be honest -- when Johnny Depp walks in the room, everyone's excited to see him," he said. "There's no mincing words about that, and it's a great pressure-relief."

Despite the movie's big budget -- which was originally projected in the $250 million range, and had to be trimmed by about $35 million for Disney to restart production after initial budget unease -- Hammer said that the mood on the set is like that on an indie film. "I realized that after lunch on the first day," he said. "We're a bunch of dudes in a room. This doesn't feel like a big movie. This feels like any other great, small movie, because we're all invested in the outcome of the project, and we're happy about what's going on. This is the smallest big movie."

Hammer also wasn't surprised at the stops and starts in preproduction last summer while the budget was reconfigured. "I've always kind of had a feeling that [Disney] shutting down [the film] was this hyper aggressive negotiation technique, to force budget cuts," he said. "That's how I viewed the whole thing, that they were playing hardball. And so we got it back to where they could say, 'Go ahead.'" Was he ever worried it wouldn't get the green light? "It's too great, too exciting, too much of an opportunity to shut it down," he said. "And it's too much fun to watch Johnny do his thing."

One of the things that was not cut from the film as a budget trim, Hammer said, were any werewolf special effects -- but then that's because werewolves are not part of the story, despite previous reports. "Throughout my involvement, there have never been any wolves," the actor said. "I don't know where that came from. When I was first hired, I kept hearing about it, and I asked, 'What is this wolf business?' But there are no wolves, and there have never been wolves."

Hammer also dismissed rumors of other supernatural elements to the story. "There are no miracles, and there are no shapeshifters," he said -- so no Wendigos. He did confirm, however, that there is a layer of Native American mysticism.

"More than anything else, this is a fantastic adventure and a buddy comedy," Hammer said. "It's more about the relationship between Tonto and the Lone Ranger, and the way they help each other."