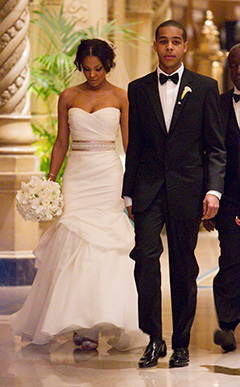 Six months after announcing her engagement, "Gotta Tell You" singer Samantha Mumba tied the knot with Torray Scales in L.A. Friday, Us Weekly can confirm.

The bride, whose other hits include "Baby Come On Over" and "I'm Right Here," wore a strapless mermaid gown with a sweetheart neckline. The Irish pop star wore her hair up and carried a white bouquet of roses. Mumba's younger brother, Omero, escorted her down the aisle.

A source tells Us the ceremony was delayed an hour as the party waited for family members to arrive.

Scales, a police officer, popped the question on June 26 in Newport Beach, Calif. "It was very romantic and special," Mumba, 29, told Us in August. "It's the happiest we've both ever been."

In addition to her music career, Mumba has also appeared in several films, including The Time Machine, Spin the Bottle and Boy Eats Girl.

You may remember this 00's pop classic