Fluke 'Not Ruling Out' Suing 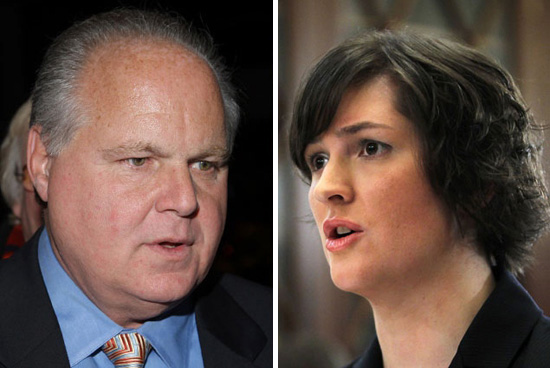 In a rare show of remorse, Rush Limbaugh has apologized for calling a Georgetown law student a "slut".

"For over 20 years, I have illustrated the absurd with absurdity, three hours a day, five days a week. In this instance, I chose the wrong words in my analogy of the situation. I did not mean a personal attack on Ms. Fluke," he said in a statement on his website about his attack against Sandra Fluke.

His apology comes shortly after four sponsors announced they were severing ties with the show.

The statement came after Limbaugh criticized Fluke for testifying in front of a House panel in favor of President Obama's mandate that would require employers to cover contraceptives for women.

In the three-paragraph long statement posted on his website Saturday afternoon, Limbaugh said his intent was to air his beef with "personal sexual recreational activities before members of Congress" and said that he does not "agree that American citizens should pay for these social activities."

During the past four days, he turned Fluke into an international media star with fiery rants, calling her "a slut" and "prostitute" who is having so much sex that she can't afford to buy her own contraceptives. He also proposed that she make a sex tape for taxpayers to view.

Politicians on both sides of the aisle have called Limbaugh's language disappointing.

In an interview with the Daily Beast published on Saturday, Fluke said she wasn't ruling out suing Limbaugh over hisbarrage of insults.

"I've certainly been told I might have a case," the third-year law student told the Daily Beast. "But it's not something I've made any decisions about at this point."

In his surprising statement, Limbaugh said his "choice of words were not the best, and in the attempt to be humorous, I created a national stir.

"I sincerely apologize to Ms. Fluke for the insulting word choice."