British crooner Englebert Humperdinck is to represent the UK at this year's Eurovision Song Contest.

The 75-year-old, dubbed the "King of Romance", is best known for his 1967 hit Release Me, which kept The Beatles' Strawberry Fields Forever off the number one spot.

The singer said it was "an absolute honour" to be taking part and was "excited and raring to go".

This year's competition will be held in Baku, Azerbaijan, on 26 May.

The song Humperdinck will perform has yet to be announced but the BBC said it would be recorded in London, Los Angeles and Nashville.

Humperdinck - whose real name is Arnold Dorsey - has sold more than 150 million records worldwide during his 45 year career. 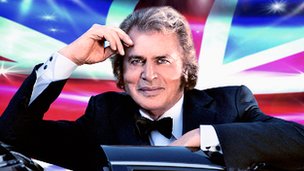 Born in Chennai to a British army officer, he took his stage name from a German composer best known for his opera Hansel and Gretel.

He scored a UK number one with The Last Waltz and had other hits including There Goes My Everything and A Man Without Love.

His last UK top 20 single was 40 years ago with Too Beautiful To Last which reached number 14.

The singer has received four Grammy nominations, a Golden Globe for Entertainer of the Year and is one of only a handful of artists with a star on both the Hollywood Walk of Fame and the Las Vegas Walk of Fame.

"It's an absolute honour to be representing my country for this year's Eurovision Song Contest," the singer said.

"When the BBC approached me, it just felt right for me to be a part of an institution like Eurovision. I'm excited and raring to go and want the nation to get behind me!"

Humperdinck is the oldest ever Eurovision contestant and if he wins, will be the UK's first victor since Katrina and the Waves 15 years ago.

"Engelbert's age isn't the reason why we chose him to represent the nation for Eurovision, but it's nice to break a few records along the way," a BBC spokeswoman said.

Katie Taylor, BBC head of entertainment and events said: "Not since the 70s have we had such an established international musical legend represent the nation.

"We couldn't be more delighted. Engelbert's experience leaves us in no doubt that he will be able to deliver a standout performance in front of 120 million viewers worldwide."


according to the Telegraph

The Eurovision single, yet to be announced, has impressively cool credentials: it will be written and produced by the team behind Adele, Mary J Blige and Lana Del Rey.

I
this is the BBC