i keep dancing on my own (

≤ One Million Moms takes up issue with comic book characters

One Million Moms, the conservative group which previously targeted JCPenney for hiring Ellen as their new spokesperson and Clorox for its “sexual” Liquid-Plumr ad, has extended its not-quite-one-million talons in the direction of Toys R Us, calling for a boycott of the chain over its stocking of an Archie comic featuring the same-sex marriage of character Kevin Keller. 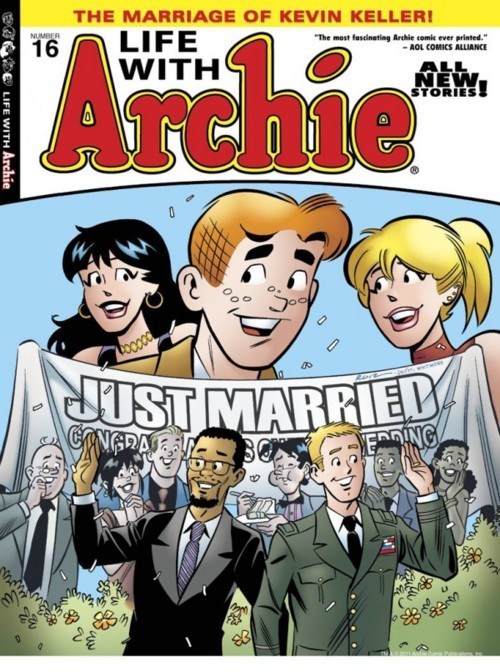 The American Family Association-affiliated organization published the following statement on their website:

Unfortunately, children are now being exposed to same-sex marriage in a toy store. This is the last place a parent would expect to be confronted with questions from their children on topics that are too complicated for them to understand. Issues of this nature are being introduced too early and too soon, which is becoming extremely common and unnecessary.

As I’ve said before, Riverdale is a safe, welcoming place that does not judge anyone. It’s an idealized version of America that will hopefully become reality someday. We’re sorry the American Family Association/OneMillionMoms.com feels so negatively about our product, but they have every right to their opinion, just like we have the right to stand by ours. Kevin Keller will forever be a part of Riverdale, and he will live a happy, long life free of prejudice, hate and narrow-minded people.

I don't know why they're boycotting Toys R Us in particular considering this comic is sold in many places. lol @ their "reason". It isn't hard to interact with your kid for five minutes.