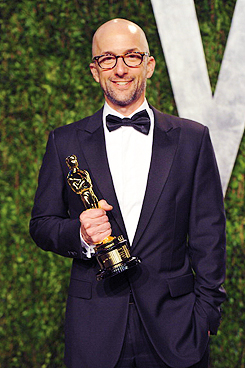 Fresh off their Oscar win for "The Descendants," scribes Nat Faxon and Jim Rash have sold to Indian Paintbrush an original action-comedy pitch that has Kristen Wiig attached to star.

Sale was a competitive situation that drew multiple offers from studios.

Kevin Walsh will produce through his banner, the Walsh Co., along with Indian Paintbrush's Steven Rales and Mark Roybal. Faxon and Rash will also serve as executive producers. Wiig's deal is being negotiated.

The writers have a long working relationship with Wiig from their days performing with Los Angeles improv troupe the Groundlings. Roybal and Walsh both started their film careers working for Scott Rudin.

In addition to writing a second script for Fox Searchlight and Alexander Payne, Jim Burke and Jim Taylor's Ad Hominem Enterprises, Faxon and Rash will make their directorial debut this summer with their Black List script "The Way, Way Back," with Sam Rockwell and Allison Janney set to star. The pair also work in front of the camera. Rash is a series regular on NBC's "Community." Faxon on Tuesday was cast as the co-lead in the Fox comedy pilot "Ben Fox is My Manny."

Walsh, who was one of Variety's 10 Producers to Watch last year, is producing that pic, as well as James McTeigue's revenge thriller "The Gringo." Walsh is also producing the political action-thriller "Patriot Down" and the comedy "King Dom," co-written by "The Break Up" scribe Jay Lavender.

Wiig is coming off an Oscar nomination for co-writing "Bridesmaids." The laffer grossed more than $288 million worldwide.

Indian Paintbrush is poised for a busy year, backing Paramount Vantage's "Jeff Who Lives at Home" and David Chase's "Not Fade Away," Focus' "Moonrise Kingdom" and "Seeking a Friend for the End of the World" and Fox Searchlight's "Stoker." Company is gearing up to shoot Jason Reitman's "Labor Day" with Kate Winslet and Josh Brolin set to star.

Faxon and Rash are repped by CAA and Principato-Young Entertainment, while Wiig is repped by UTA and manager Naomi Odenkirk. Walsh is also repped by CAA. Peter McPartlin of Indian Paintbrush negotiated the deals.