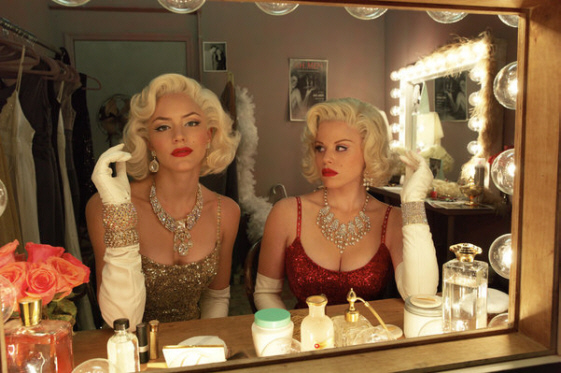 By now you’ve probably seen either a commerical or a billboard for NBC’s highly anticipated (and hugely publicized) new musical drama Smash, which premieres on the network Feb. 6 at 10pm. Former American Idol contestant Katharine McPhee stars as struggling actress Karen Cartwright, competing for the leading role in a new musical based on the life of Marilyn Monroe. It’s an incredibly ambitious series (hatched by an idea from none other than Steven Spielberg) that mixes backstage drama with elaborate musical numbers. And McPhee has already drawn buzz for this star-making role. “I think that’s a nice way of looking at it,” says the actress of this beingKatharine McPhee 2.0. “I was really surprised in the trailers when they said, ‘And introducing…Katharine McPhee.’ But it is a new introduction because people don’t know me as an actress.” EW chatted with McPhee on the Smash set and talked about meeting Spielberg for the first time and her fight to get roles after American Idol.

ENTERTAINMENT WEEKLY: So I heard you actually met Steven Spielberg after Idol?
KATHARINE MCPHEE: Yeah I did. He brought me in. It was the most bizarre thing. I  remember just being obviously elated about meeting him. It was just a general meeting. They said just go to his offices at Dreamworks at Universal Studios. He had me in his office and I met Stacey Snider. They were just the most lovely, sweet people. I was just so excited. He was asking me questions about what I wanted to do and my aspirations. I told him I wanted to act and I had been acting and before Idol that was sort of my dream.