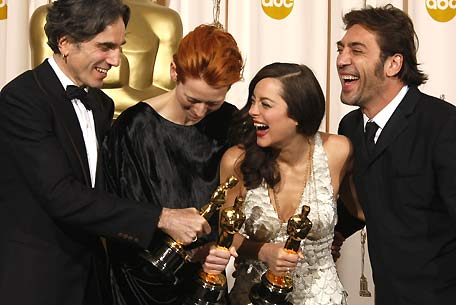 “I am so grateful to be acknowledged by the Academy for my work, which was made possible by the support of our director Simon Curtis and the camaraderie of a terrific ensemble of actors – a special congratulations to Kenneth Branagh – and the fearless Harvey Weinstein. This role has been the challenge and privilege of a lifetime. I would like to think that the recognition our film has received by the Academy is a testament to Marilyn’s legacy.” - Michelle Williams (Best Actress, "My Week With Marilyn")


“This afternoon in Berlin I have learned that I was nominated for an Academy Award in the category of Best Actor. You may have heard this before, but it has never been truer than it is for me today, it is extremely humbling, gratifying, and delightful to have your work recognized by the Academy, and to join the celebrated ranks of previous nominees and colleagues. Amazing.” - Gary Oldman (Best Actor, "Tinker Tailor Soldier Spy")]


“I am honored to be in company with such beautiful artists, and touched deeply by my fellow actors for their generosity in giving me this acknowledgment.” - Meryl Streep (Best Actress, "The Iron Lady")


“It’s an honor to be nominated a second time, it is a personal accomplishment and triumph for women and women of color. I’m so glad the film has been recognized, it was a labor of love from the moment it was conceived and it is rewarding to see the impact it is having.” - Viola Davis (Best Actress, "The Help")


"I am thrilled for Janet, I am thrilled for our incomparable hair and makeup team. It might be my sixth (lol) but it feels like my first. Bravo team Nobbs." - Glenn Close (Best Actress, "Albert Nobbs")


“I am so grateful to the Academy for this recognition. I can’t help but stop and think about how incredible this journey has been. From filming on a Hollywood soundstage to the moment I received this wonderful news this morning, I’m so humbled to be amongst such distinguished and talented people. I share this honor with my friend and director, Michel Hazanavicius. It is his beautiful film that has led me here today. I also share this with the brilliant cast and crew.” - Jean Dujardin (Best Actor, "The Artist")


"This is an extraordinary honor. I am dizzy with joy… and caffeine. Considering both films, 'Moneyball' and 'The Tree of Life,' nearly didn’t make it to the screen, this is especially sweet. And I’d like to thank all the artisans and craftsmen who gave their best to each film. I am especially over the moon for Jonah (and the other Moneyballers acknowledged today), Terry Malick and the tribute this is to Billy Beane and the Oakland A’s organization. My congratulations to all the nominees… pancakes for everyone!" - Brad Pitt (Best Actor, Producer, "Moneyball")


“I’m overwhelmed for having my name among those incredible actors. This could have never happened if Chris Weitz had not been the head of this film. He is my brother and I thank him deeply. Hopefully more and more people will jump into iTunes and Netflix to see our film. That will be the biggest reward we could get. I dedicate this nomination to those eleven million human beings who make our lives easier and better in the US.” - Demian Bichir (Best Actor, "A Better Life")


“I’m overjoyed and filled with happiness. I can’t believe that a year ago I was learning how to tap dance and today I am nominated for an Academy Award. It was a thrill to work on a project as ambitious as ‘The Artist’ and I am happy to share this moment with our visionary director, Michel Hazanavicius and our talented team of actors.” - Berenice Bejo (Best Supporting Actress, "The Artist")


"I am never presumptuous because these sorts of things are beyond our control and I didn't want to be set up for disappointment," Spencer said. "A lot of us actually went to dinner last night and slept over and wanted to be together when we found out, so in case we didn't get that call we wanted to be nice and hungover." - Octavia Spencer (Best Supporting Actress, "The Help")

“It was a rare honor to play Sir Laurence Olivier. To be recognized by the Academy for doing so is overwhelming. I'm absolutely thrilled.” - Kenneth Branagh (Best Supporting Actor, "My Week With Marilyn")


“My sincere thanks to my colleagues at the Academy. It is wonderful. I don’t know what to say – I am dumbfounded.” - Max Von Sydow, (Best Supporting Actor, "Extremely Loud and Incredibly Close")


"I am so humbled, appreciative and in shock about this incredible honor. I'd like to thank the Academy, Sony Pictures , the cast and crew of 'Moneyball,' Brad Pitt, and, most of all, our brilliant director Bennett Miller." - Jonah Hill (Best Supporting Actor, "Moneyball")


“It’s a shot in the arm for a young kid of 82 to receive an Academy Award nomination this morning. My gratitude to writer/director Michael Mills, the Academy, and to everyone involved with Beginners.” - Christopher Plummer (Best Supporting Actor, "Beginners")


“I am so honored by this nomination. Filming ‘The Artist’ in Los Angeles was a dream come true, and to receive this recognition today is far beyond what any of us could have ever imagined. I could not have done this film without the incredible ensemble of actors and exceptional crew whose heart and souls were poured into this project.” - Michel Hazanavicius (Best Director, The Artist)


"I am deeply honored to have been nominated by the Academy for my work on 'Hugo.' Every picture is a challenge, and this one - where I was working with 3D, HD and Sacha Baron Cohen for the first time - was no exception. It's a wonderful feeling to know that you've been recognized by the people in your industry. I congratulate my fellow nominees. It's an impressive list, and I'm in excellent company." - Martin Scorsese (Best Director, Producer, "Hugo")


“There's no denying that Oscar nominations for one's film are exciting, if only for the joy they give to everyone who worked so hard on the film. I'm particularly happy for the recognition of my long-time editor Kevin Tent. He really deserves it.” - Alexander Payne (Best Director, Best Adapted Screenplay, Best Picture, "The Descendants")


“I am humbled and over-joyed to learn of my Oscar nomination. Last week I came to Hollywood for the first time in my life, which in of itself, was a dream come true. I started playing the accordion when I was 8 years old, I wish I could go back in time at tell myself about today, the dream continues!” - Ludovic Bource (Original Score, "The Artist")


“I am honored to be nominated for a academy award for such a beautiful film that is love letter to Hollywood. Since I was born in Hollywood and second generation in the film business I went to work each day filled with enthusiasm. I am proud to contribute to something that shows gratitude to the business that has given my family and myself so much gratification.” - Robert Gould (Art Direction, "The Artist")


“We are so humbled by these nominations. ‘The Artist’ was a labor of love from writer/director Michel Hazanavicius and a tremendous ensemble of actors and creative, talented people to pay homage to Hollywood. Cinema has no boundaries and we hope it can unite the world in these challenging times. Today the Academy has given us something we will never forget.” - Thomas Langmann (Producer, The Artist)


"We are thrilled for the nominations 'War Horse' has received and most of all thankful to have been working under the leadership of Steven Spielberg whose moral clarity, vision and sensitive handling of the Great War might serve in some small way to raise awareness of war's pointlessness." - Kathleen Kennedy (Producer, "War Horse")


“I'm stunned and thrilled to hear about the nomination. I wish more than anything in the world that my wife Bridget O'Connor - who did the lion's share of the adaptation - could be here to enjoy this moment. She would be so happy and so proud. I'm going to go and meet my daughter now and tell her how clever her mother was!” - Peter Straughan, (Best Adapted Screenplay, "Tinker Tailor Soldier Spy")


"I was actually working on a 'Skyfall' scene that films in London tomorrow, so had to run from my computer to watch the nominations and then right back to 007. I'm enormously honored to have heard my name read alongside those other talented writers. It's a head-spinning company. 'Hugo' has been one of the great joys of my writing life and I'm beyond proud the movie has been so recognized." - John Logan (Best Adapted Screenplay, "Hugo")


“It’s fantastic to be nominated for Best Documentary for the second time after “Buena Vista Social Club”, especially as it is the first time for a 3D film to be given that honor. All the dancers and collaborators of the Tanztheater Wuppertal Pina Bausch, together with the crew and the production company Neue Road Movies, are extremely honored. With our journey into the magical kingdom of the great German choreographer Pina Bausch we wanted to raise a monument to this pioneer of modern dance. The worldwide success of PINA and now this Oscar nomination are fantastic rewards and recognition of our common work.” - Wim Wenders (Best Documentary, "Pina")


"It is an incredible honor to be nominated this morning. We set out to do something different with 'Rango,' and this distinction is a testament to everyone who tirelessly dedicated themselves to creating our neurotic lizard. 'Rango' was looking for an audience who shared his love of cinema and I’m humbled that he found one. It has been a remarkable journey, and one that I am grateful to share with our entire creative team, Paramount, and all of the virtuosos at Industrial, Light and Magic." - Gore Verbinski (Best Animated Feature (Director), "Rango")


"I woke up to a text and thought, 'Am I still dreaming?' What an absolute honor to be nominated. Thank you to the Academy on behalf of the entire cast, crew, our swashbuckling cat and his boots! This is beyond a thrill...and I'm pretty sure I'm awake." - Chris Miller (Best Animated Feature (Director), "Puss in Boots")


"Today's nomination is a huge boost of encouragement for the hundreds of dedicated cast and crew that have created such a beautiful film. I am deeply proud of what we have achieved together and honored by the Academy with this recognition." - Jennifer Yuh Nelson (Best Animated Feature (Director), "Kung Fu Panda 2")


“What is happening to the film is galaxies away from what I had initially hoped for. I say this, of course, in a good way. I rejoice in the fact that such an intimate film can find its way alongside Hollywood productions, proof that there is not only one path to artistic and public recognition. I am thrilled and I want to share this moment with all the members of Monsieur Lazhar’s team, wherever they are right now. This is also their nomination. I also have a special thought at this moment for my family.” - Philippe Philippe Falardeau (Best Foreign Language Film, "Monsieur Lazhar")


“This is cheerful news for me and for the family of cinema in Iran, specially the nomination for the best original screenplay. It seems that although people speak different languages around the world but there is one common universal language which everyone understands: The Language of Cinema.” - Asghar Farhadi (Best Original Screenplay, Best Foreign Language Film, "A Separation")

more as they appear? idek. but i want more of these: