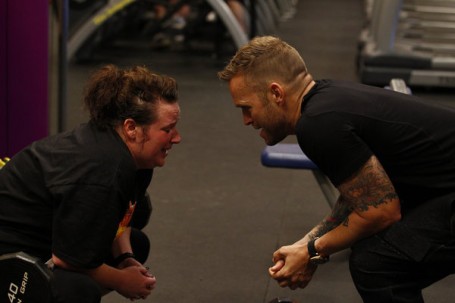 takin a sh*t before the weigh-in

Last week on NBC‘s The Biggest Loser, we watched as tension built between Conda Britt and Cassandra Sturos, but Conda could not seem to let it go. This week we will watch as Dolvett Quince struggles with Conda, who seems to have it out for him next! Read on for a preview and video of tomorrow’s tonight's brand new episode!
The Biggest Loser returns tomorrow tonight for more drama, and hopefully some weight loss! If you tuned in last week, you saw the drama and tension between Conda and Cassandra, and although Cassandra moved past it, it appears as though Conda takes it to the next level this week – she seems to be boycotting Dolvett Quince! NBC states in their preview:
Red and Black teams compete for exclusive use of the gym — The stakes are high this week as the red and black teams compete in a fierce battering ram challenge that will give one team exclusive rights to the gym, while the losing team has to find other creative ways to burn calories. Both trainers – Bob Harper and Dolvett Quince – struggle with certain contestants who they feel aren’t giving it their all, making it tougher for both teams to get the weigh-in win each one wants.
Check out the preview video below: