An image from the True Grit star's advertising campaign showing the teenager crying on railway tracks has been pulled.
The Advertising Standards Authority ruled that the image below, showing the 14-year-old actress sat on a train track and wiping away what could be tears from her eyes, was irresponsible because it depicted a child in an unsafe location.

Prada Retail UK, who own the Miu Miu brand, said the image, captured by renowned fashion photographer and film-maker Bruce Weber, was "part of a serious, high-fashion campaign" and "based on the set of an imaginary film". 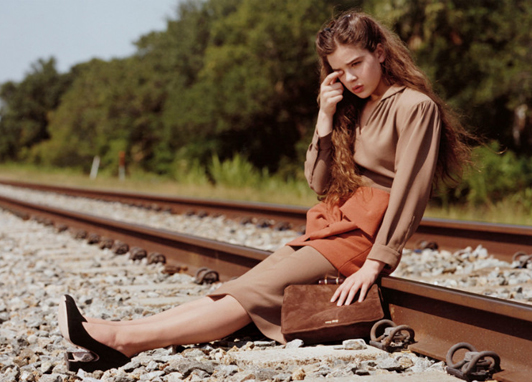 Prada also claimed that it was clear that Steinfeld "could have easily moved from where she was sitting because she was not restrained in any way", but the ASA ruled that the potentially hazardous railway setting was "irresponsible" considering her age.

The vogue for casting child actresses in ad campaigns has raised eyebrows in the fashion industry, not least because the dresses Steinfeld can be seen modelling, for the current season, cost upwards of £1,000. Dakota Fanning, a fellow teenage film actress, had one of the images from her Marc Jacobs' Oh, Lola! fragrance campaign banned because the position of the perfume bottle - between her legs - was deemed sexually provocative.
In contrast, Miu Miu's forthcoming new ad campaign features model Guinevere Van Seenus, who, at 34 years old, is more the twice Steinfeld's age.