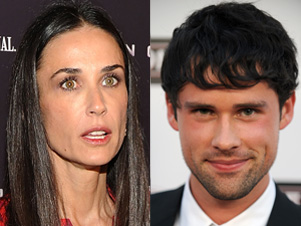 PETERBOROUGH, ONT. – The father of Ben Hollingsworth, currently in the tabloids over a rumoured affair with Demi Moore, says he’s not at liberty to talk about his son’s personal life.

Brian Hollingsworth told QMI Agency on Friday he hasn’t been able to get in touch with his son since rumours started circulating earlier this week about an alleged affair between Ben and Moore.

In Touch magazine first reported that Ben, 27, had a one-night affair with the 48-year-old actress, who’s also married to Ben’s good friend Ashton Kutcher, currently starring in the TV series Two and a Half Men.

Kutcher has recently been accused of his own marital infidelities, with tabloids speculating on two alleged affairs last month.

Ben has denied the Moore rumour on his Facebook page, he couldn’t be reached for comment. Ben and Moore met while working together during the filming of The Joneses.

But Brian was happy to share his son’s recent acting triumphs, which include a role on CSI: Miami this Sunday and a reoccurring role in a new series called Suits.

A graduate of St. Peter’s Secondary School here, Ben attended the National Theatre School in Montreal before heading south to pursue his movie and television career.