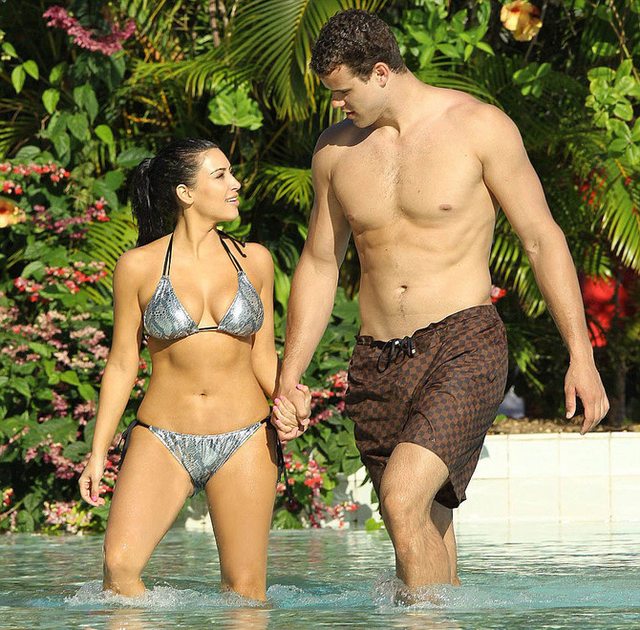 Rob Delaney, one of the most popular stand-up comedians on Twitter, announced in his column on VICE.com that he's planning on suing Kim Kardashian to prevent her plan to divorce husband Kris Humphries after 72 days of marriage. He also announced that he will also sue Ryan Seacrest, E! Entertainment Television and Comcast for their part in promoting what he suspects was a "sham marriage" from the beginning.

Delaney writes that he is personally offended by the extravagant build-up of the televised wedding, its massive price tag and seemingly flippant end.

TAKE A STROLL... WITH ROB DELANEY - I AM SUING KIM KARDASHIAN
By Rob Delaney

I wish to formally announce that I am suing Kim Kardashian to stop her divorce from Kris Humphries. I am also suing Ryan Seacrest, E! Entertainment Television, and Comcast for promoting their sham marriage, bilking advertisers, and polluting the airwaves of America and every other nation unfortunate enough to be subject to the disease of Kardashia.

HOW I IMAGINE THEIR “WEDDING” WAS PITCHED:

“I know! We’ll have Kim get married! It’ll be a ratings bonanza! We’ll bludgeon the populace with billboards and commercials, build it up across our 14 execrable spinoffs, hire some psychologists to help Kim and Kompany approximate the appearance of human emotion as they navigate the wedding preparation, split the actual wedding over two interminable episodes—even accompany them on the honeymoon! And the best part is, it doesn’t even have to be real! We’ll have Kris (Humphries, not Kris Jenner, Kim’s mom (though having her marry her own mom once ratings start to slide IS a great idea!!!)) sign a pre-nup that is also a non-disclosure agreement AND a waiver stating that if he even talks in his sleep about the “marriage’s” details, he’ll be beaten, drugged, and given a facelift from the same doctor who did Bruce Jenner, and then forced to walk the Earth terrifying children and animals for eternity.”

POSSIBLY THE GREATEST MAGAZINE COVER OF ALL TIME

Ryan Seacrest is the executive producer of the 22 existing Kardashian programs. Please revel in this amazing quote from him, which recently appeared on the cover of PRODUCED BY magazine, the official magazine of the highly principled and ever-honest Producers Guild of America: 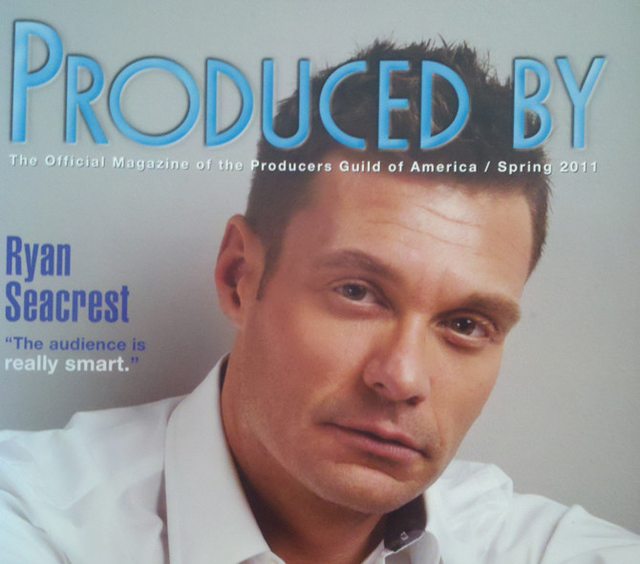 WHAAAAAAAT?! A lot of people toss the word “irony” around without really knowing its precise definition. This quote, from this person, is its precise definition. William Shakespeare would have been like, “Damn bro, I can’t top that.” I’m glad he’s been dead for 400 years and can only see it through a time-telescope that Leonardo da Vinci made for him on his 300th birthday.

THE MEAT OF THE MATTER

I digress. I guess I’m just nervous because I’ve never sued anyone before, and this is not a joke. I AM suing Kim Kardashian and the others mentioned above. It is alleged that Kim Kardshian was paid $18 million to participate in her own wedding. I feel like schools could use that money. Or health clinics in areas hit hardest by the recession. Or Pizza Hut. Or Bernie Madoff. Or my uncle Mitchell, who is a convicted sex offender making a living selling Percocet to the elderly in Rhode Island.

Also, quitting your marriage now is a rather public admission that you are very, very bad at the job you were hired to do. I will be surprised if the venerable fashion house Sears renews your “design” contract.

I don’t mind that Kim Kardashian got married. If gay people can get married, Armenian people should be allowed to as well. I don’t mind that she did it on TV. I a little bit mind that, as a non-viewer of any of the 61 Kardashian programs, I had to see the billboards every day as I drove to work. But I could forgive that if Kim gave her marriage a real go. I’ve been married for five years. To the same woman. I’ve wanted to divorce her at times. She’s wanted to divorce me at times. But one great thing about marriage, when it’s entered by regular folks, in good faith, is that it’s hard to exit. It costs money. You have to talk to lawyers during business hours except whoops—you have a job that you need to earn money to buy food and pants—so when are you going to both take the time to do that? By the time you’d have gotten around to it, you’ve forgiven each other and maybe even reached a new appreciation for each other as you worked through whatever seemingly insurmountable problem made you hate each other for 20 minutes while you sat in your shitty car outside a CVS yelling at each other and crying. Because guess what, Kim? That’s a huge ingredient in a SUCCESSFUL marriage. Sometimes it sucks. And I don’t mean lower-case “s” sucks. I mean it SUCKS so fucking hard you’re POSITIVE you’ll give yourself stomach cancer or an embolism as you try to make your spouse explode through telekinesis. When you relax, however, and remember that you’re a bigger asshole than they are, with enough neuroses and calcified bad habits to warrant their own card catalog, you realize that they’re struggling through life’s shit storm just like you. Then you take a shower together and fuck while laughing.

KIM KARDASHIAN, I WANT THIS FOR YOU. I don’t hate you. I hate your shows. I hate that I know who you are. But I could move to Patagonia or New Guinea and escape you if I wasn’t as willingly bound up in our terrifying modern consumer culture as you are. I know that under your unnecessary inch of makeup and Kevlar sheath dress is a heart that yearns for true love and could find and appreciate the pleasures in marriage that I described above. That’s why I’d like you to stay married. And if you won’t, I will sue you. Because when you wrap your marriage vows around a cubic zirconia encrusted baseball bat and beat us about the head and face with them, you can stay the fuck married for more than 20 minutes, you sexy monster. I’ll see you in court.