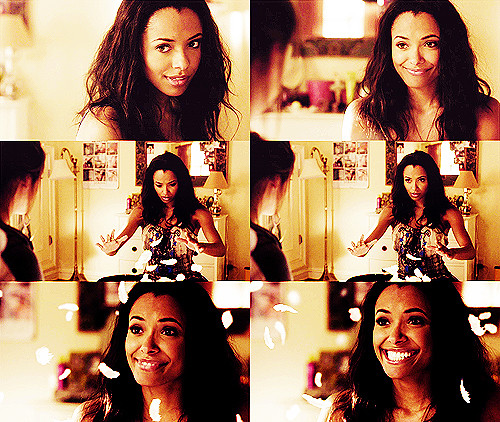 TVD shoots in Atlanta, so it's rare for us to see our fave cast members in Los Angeles very often. Still, the stars aligned this summer and we had the chance to hang with the lovely Kat graham twice in one week.

Of course we were happy to see her, but it made us a little nervous that she wasn't back in Atlanta filming. Kat assures us that Bonnie hasn't taken an extended summer vacation.

"I'm in the season premiere!" she says. "The important thing is that my fans watch the episodes whether they think I'm in it or not, and support the writers the way they've supported me when I was just a nothing actress trying to make it. It's all about the story overall, and the fans need to appreciate that and have faith that Bonnie's time will always come."
When we see Bonnie in Season 3, she's concerned about Jeremy, though he still hasn't told her that he's being haunted by his dead vampire ex-girlfriends. In fact, it looks like Jeremy is going to confide in someone else about Vicki and Anna before he tells Bonnie -- but of course, that's not to say that Bonnie doesn't have plenty of other things to worry about.

"She's concerned about Elena, too," Kat says. "Elena is always a priority to her, so shealways wants to make sure that Elena's okay and safe. I don't think that'll ever change."
Though Kat has unwavering faith in "The Vampire Diaries" writing team, she does have one hope for Bonnie's future -- and it's something that all of us fans have been wishing for. "If we could just see a family member, I would be just thrilled," she says. "I couldn't even ask for anything more than that. Other than that, I'm cool with whatever they want to do with me! Whatever they give me, I'll bust my ass on."

Kat's used to working her butt off -- in addition to "TVD," she's been working on furthering her music career. She finished recording her highly anticipated album over the summer, and we're dying to get a listen. "Now we're just sifting through thirty records and trying to figure out what the single is going to be," she tells us.

As for what Kat herself is listening to this summer, she's been on a Queen kick -- and her Teen Choice outfit was even inspired by Freddie Mercury. Check out our video interview with her from the red carpet for more on her dazzling dress, plus find out the one thing she'd love to use magic on in real life. source