Stooshe may not be sweet but they're certainly spicy 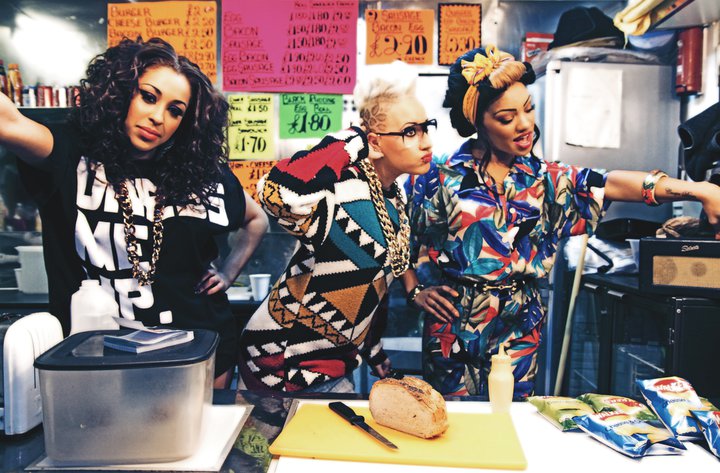 Since they set out to make their mark in girl group history in January this year, StooShe have raised eyebrows, turned heads and set tongues wagging.

Adding a spot of rudeness and anarchy to the early Spice Girls formula, this week they follow their free to download X-rated debut F*** Me with a chatty and suggestive version of Ini Kamoze’s club classic Here Comes The Hot Stepper.

The colourful three piece – and their 31-year-old manager, songwriter Jo Perry – are sipping juices and lattes in a swanky Camden cafe. Jo, who the girls refer to her as “our music mummy”, held nine months of auditions before finding the perfect combination.

Alexandra Buggs, 21, has a marketing degree and is descendent of Ghanaian royalty. Her glamourous appearance is offset by her the way she candidly relates stories about wetting herself when drunk or vomiting the first time she went out with her boyfriend.

“I’m from the Ashanti line in West Africa. My mum’s mum was a queen,” she says, flashing a movie star smile.

“I had to stop dancing because they said my bum was too big, I do have a really arched back.”

“I was in Topshop and the lady who is now our stylist said, ‘Me and Jo Perry are putting a band together, do you want to audition?’ she recalls. “So I went and auditioned. That’s how it happened.”

There are lots of giggles as the girls describe how their parents reacted to the arrival of their first single, F*** Me.

Karis declares, “My mum loved it, she was shouting, ‘More, more, more!’ I went to a family reunion the other day and my granny was telling my aunties about the group but she couldn’t say the title. At the end of the day people shouldn’t take it too seriously because we don’t. Listen to the singing, the harmonies and the melodies.”

Courtney’s part in the song allowed her to make her sexual preference clear.

“What a way to come out,” she smiles. “Everybody I’ve met is cool about it. At first I was a bit worried about explaining to my mum, but she read about it on the internet and it was cool.”

Alex adds, “People are afraid to break rules nowadays our only rule is there are no rules.”

Although they were brought together by Jo, the girls claim the rapport evident on their records was natural and immediate.Karis explains, “ We had so much in common it was weird, like fate.”

Courtney agrees, “We even finish each other’s...

“We’re all connected by the brain,” concludes Courtney.

There is more laughter all round when the girls consider how wild they are. So have they ever been in trouble with the law?

Simon Cowell has his beady eye on Stooshe, Fazer from touring partners N-dubz has expressed an interest in producing them, while Dappy suggested something of a more personal nature.

“We were in our dressing room the other day and Dappy came in,” explains Karis. “We share an agent and we thought he was a nice guy. Then afterwards we heard that he told our agent’s assistant that he wanted to give us all his d*ck!

“If we had known that I don’t know if we would have been so welcoming.”

Recently, after cheekily sneaking footage of Adele and Black Eyed Peas into their video for Hotstepper, the girls went off to celebrate in Amsterdam.

“It was hilarious,” Karis explains. “You don’t hear of many girl bands going to Amsterdam with their manager.”

They even went to see a performance – Courtney takes up the story. “Alex is conservative but she has a flipside and she ate a banana off a stripper’s breast.”

“While I was doing it she slapped her breasts in my face,” adds Alex.

As they dreamily recall the post-show smoking refreshment available elsewhere in the city, it’s clear that manager Jo’s idea is to create an off-message girl group not beholden to record company chiefs or A&R marketing departments.

“We were just thinking the other day,” says Courtney. “Wouldn’t it be nice if we were all at The Grammies in 10 years time? It could be such a good feeling to be older but still singing together.

“The best advice our music mummy gave us is to stick together, not let anything mess with your head and stay grounded and real. Stay ourselves.”

Source: The Mirror
F**k Me